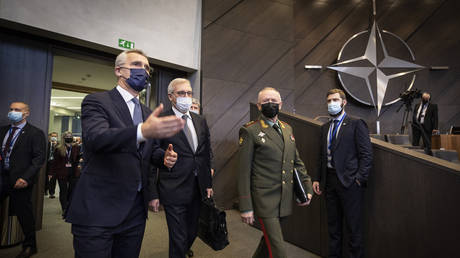 In a statement released on Saturday, the Democratic Socialists of America (DSA) blamed actions by the US and NATO for having helped to spark the Russian invasion of Ukraine, sparking condemnation from other Democrats.

“DSA reaffirms our call for the US to withdraw from NATO and to end the imperialist expansionism that set the stage for this conflict,” the group said in a press release.

“While the failures of neoliberal order are clear to everyone, the ruling class is trying to build a new world, through a dystopic transition grounded in militarism, imperialism, and war. Socialists have a duty to build an alternative,” DSA added, ending their statement by declaring “no war but class war.”

Condemning “Russia’s invasion of Ukraine” and calling for “immediate diplomacy and de-escalation to resolve this crisis,” DSA warned the working classes “will undoubtedly bear the brunt of this war.”

DSA is the largest socialist organization in the United States, with over 92,000 members, including high-profile Democratic congresswoman Alexandria Ocasio-Cortez and former presidential candidate Senator Bernie Sanders. With chapters in all 50 states, it has previously endorsed Democratic presidential candidates Barack Obama and John Kerry, notably choosing not to endorse current President Joe Biden.

The DSA’s position faced immediate condemnation from other Democrats from different wings of the party, who sought to reaffirm their commitment to America’s current alliances.

The DSA’s position faced immediate condemnation from fellow Democrats from the main party, who sought to reaffirm their commitment to America’s current alliances.

The White House Rapid Response Director, Mike Gwin, swiftly responded with a one-word statement, describing DSA’s remarks as “shameful,” calling on the group to re-evaluate why it “referred to the deaths of dozens of Ukrainians seeking democracy and basic freedoms in 2014 as a ‘coup’.”

Military veteran and current congressional candidate Max Rose stated that he was “deeply concerned” by DSA’s statement, adding that it’s “time to double down on our alliances” and “punish Russia with crippling and unprecedented sanctions.”

Responding to Rose’s remarks, Tom Suozzi, a Democratic candidate for Governor of New York, declared “I adamantly oppose the DSA’s statement calling on the US to leave NATO.”

Previous Posts COVID Unlock: Precautions You Must Take To Prevent Re-infection
Next Posts China comments on Western sanctions against Russia