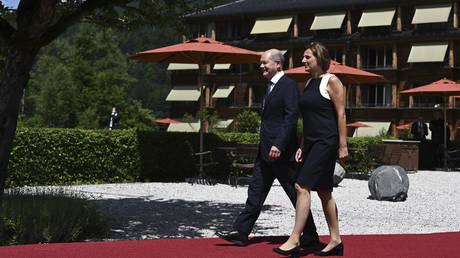 German Chancellor Olaf Scholz’s wife Britta Ernst has repeatedly disposed of private documents in household garbage, Der Spiegel reported on Friday. Not only were they mixed in with residential waste, in violation of recycling rules, some of them were apparently marked confidential as well. The outlet obtained some of the trash trove thanks to the couple’s neighbor in a posh Potsdam residential building.

Ernst, 61, is an education minister in the federal state of Brandenburg. She seems to be in the habit of disposing of confidential papers without shredding them, the magazine claimed in the story, playfully titled ‘Is this secret or can it be thrown out?’

Scholz and Ernst’s neighbor first stumbled on the documents in November last year. Among the papers littering the floor outside the garbage collection room was a draft of the speech Ernst had delivered a few days earlier.

According to the magazine, it’s bad enough that the German leader’s family isn’t sorting their waste for recycling according to government guidelines, but Ernst in particular doesn’t seem serious about handling private documents.

Among the papers Der Spiegel was shown is a page from Ernst’s appointment calendar from May and a printed email showing her wanting to improve her conversational English. Another sheet shows her planning how to dress for the day of the federal elections in September 2021.

The most recent document dates back to last month’s G7 summit in Bavaria. It’s a collection of profiles of the spouses and partners of the group’s heads of state, which Ernst was charged with looking after. A note under the photo of Maria Cappello, the wife of Italian PM Mario Draghi – who just recently resigned – says “avoids the public.” Yuko Kishida, the wife of Japan’s prime minister, is labeled “secretary at Mazda.”

While all of this is public information, according to Spiegel, the document itself was labeled “classified information – for official use only.” Both Scholz and Ernst were supposed to have been given training in properly handling classified documents, including their proper disposal. These rules say that classified documents should be destroyed in such a manner that their contents should be unrecognizable.

The magazine says it reached out to Scholz and Ernst for comment, but had not received a response from either the Chancellery nor the Brandenburg Ministry for Education, Youth and Sport.

Previous Posts US confirms first monkeypox cases in children
Next Posts Chrono Nutrition: How The Way We Eat Affects Our Blood Sugar Levels