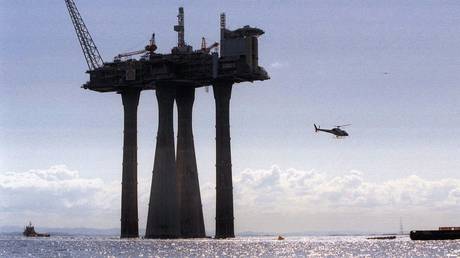 A Norwegian lawmaker has urged officials to share the country’s soaring gas profits with Ukraine, saying it would be “morally wrong” to gain from the military conflict raging in Eastern Europe. The government, however, insists its top priority is to boost output as other EU states look to curtail Russian energy imports.

Former Green Party spokesperson and current MP Rasmus Hansson has floated a profit-sharing scheme to convert gas revenues into foreign aid for Ukraine, telling Politico that “Norway is being short-sighted and too selfish.”

“We are getting a windfall profit which is very big, but the question is: does that money belong to us as long as the most obvious reason for that price increase and that extra income is the disaster that has befallen the Ukrainian people?” he added, referring to the ongoing conflict with Russia.

Hansson said experts with Norway’s sovereign wealth fund, which manages state energy profits, must determine a “normal” gas price, and that all earnings above that level should be donated to a “solidarity fund” for post-war rebuilding efforts in Ukraine.

Norwegian Foreign Minister Anniken Huitfeldt pushed back against the wealth-sharing idea, however, saying the country’s main goal is to increase energy outputs to meet a growing supply crisis in Europe.

“Norway has been asked by the EU and our European partners to step up its production to cover as much of the shortfall from Russia as we can and we have done our utmost to do so,” Huitfeldt told Politico.

The FM went on to accuse Moscow of manipulating gas prices and reducing exports, despite a slew of EU states demanding outright embargoes on Russian energy and imposing rafts of economic sanctions on Russian oil and gas companies.

Still, as some regions face sevenfold price increases, Huitfeldt said “many suggestions” are now being considered to meet shortages, though refused to elaborate on any particular plans.

“I’m hesitant to go into specific proposals at this time. One should carefully evaluate the implications of different measures so that the result is not a reduction of supply or less focus on energy savings,” she said.

Prime Minister Jonas Gahr Store claimed that it is “not in Norway’s interest that we have these extraordinary gas price spikes,” following a meeting with gas companies on Thursday. The meeting was “useful” but brought no concrete results, according to Reuters, as Norwegian gas companies are hesitant to commit to any long-term deals with the collapsing European energy providers.

Though the EU has floated a potential price cap for energy to limit the rising costs, Oslo was skeptical about the idea, arguing it would not solve supply shortages.

After taking Russia’s spot as Europe’s top gas exporter, the government has come under fire from other nations, with Polish Prime Minister Mateusz Morawiecki stating it should share the “gigantic” profits made during wartime. More recently, a Spanish environmental minister said Norway’s high-price sales were “disturbing.”