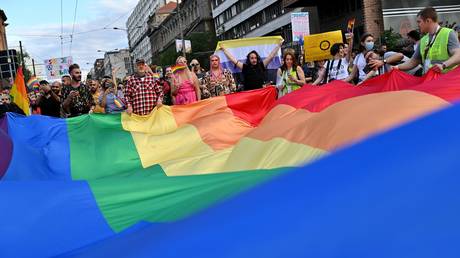 The international EuroPride parade, set to be held in Belgrade this year, isn’t going ahead, Serbian President Aleksandar Vucic has reiterated, citing safety concerns as reasons for the decision.

The security situation regarding the march of LGBTQ activists in the capital remained “difficult,” Vucic said on Saturday.

“It’s possible that there could be major unrest… we want to avoid that,” the president explained.

Vucic had already promised in late August that the parade would be called off, after thousands had taken to the streets of the capital to protest against it.

He said it was unsafe to hold the event due to threats from right-wing extremists and to fears of violence.

Serbia had been selected to host EuroPride 2022, scheduled to take place between September 12 and 17. The pan-European LGBTQ festival, held annually in various cities on the continent, includes more than a hundred events, including a pride parade.

Serbian authorities “won’t invent any nonsense” to ban the LGBTQ march, the president insisted on Saturday, refuting some reports claiming that the monkeypox epidemic could’ve been used as an excuse for the cancellation.

The decision on the parade will be made by the country’s interior ministry 96 hours before its planned kickoff “in line with the Constitution and laws,” he said.

One of the EuroPride 2022 organizers, Goran Miletic, insisted on Thursday that none of the festival’s range of activities, including the march, have yet been officially banned.

“We don’t consider it an option to cancel or postpone the Parade. It will happen according to a plan, because EuroPride cannot be imagined without a Parade,” Miletic said, inviting everyone to join the march on September 17 and to “walk together for love.”

The Council of Europe commissioner for human rights Dunja Mijatovic said earlier this week that Brussels has been working with the authorities in Belgrade “to ensure that freedom of assembly and freedom of expression are guaranteed for everyone, without discrimination” during the festival.

Serbia, which is seeking EU membership, has pledged to protect LGBTQ rights as part of its integration into the bloc.