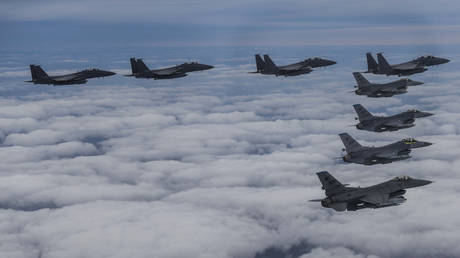 South Korea scrambled dozens of fighter jets after spotting a significant number of North Korean warplanes on radar, the country’s military said. The incident comes amid ongoing air exercises by Seoul and Washington, which have prompted several shows of force by Pyongyang in recent days.

The South Korean military’s Joint Chiefs of Staff (JCS) said 80 jets were mobilized on Friday in response to more than 180 North Korean military flights, noting that Pyongyang’s planes did not come close to the inter-Korean border.

The JCS added that US-made F-35As were among the South Korean jets scrambled, and that the military was in a “full response posture.”

While Seoul offered few details about the North Korean flights, officials said the planes remained north of the Military Demarcation Line which separates the two Koreas.

The South scrambled jets last month in a similar response after 10 North Korean planes were seen on radar, though the incident also ended without further escalation.

Tensions have soared on the Korean Peninsula in recent months, with the North carrying out a record number of weapons tests this year – including an intercontinental ballistic missile (ICBM) launched into the sea earlier this week. Seoul, meanwhile, has carried out several rounds of live-fire military drills with the United States, including the ongoing ‘Vigilant Storm’ exercise, the largest air drill ever held between the two allies. Pyongyang has repeatedly condemned the exercises as preparations for an attack, while Washington and the South say the DPRK has engaged in dangerous “provocations” with its retaliatory missile and artillery demonstrations.