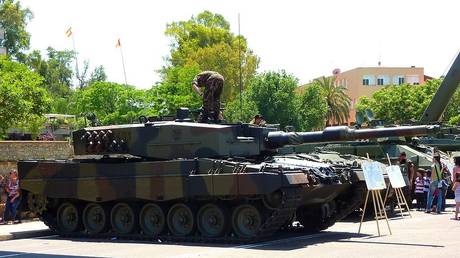 Spanish authorities are currently exploring the possibility of digging 10 German Leopard 2A4 battle tanks and 20 American M113 armored personnel carriers out of storage and donating them to Ukraine, the Spanish military news site InfoDefensa reported on Tuesday. In a complex deal involving multiple governments, the European Union will reportedly pay for the vehicles to be refurbished.

According to InfoDefensa’s sources, the Ukrainian government will pay for the mothballed tanks to be restored and modernized on Spanish soil with money from the EU’s European Peace Facility (EPF), a mechanism that, despite its name, is used to fund foreign militaries.

To date, the EU has poured $2 billion into Kiev’s armed forces through the EPF.

Spain would need the permission of Germany to donate the tanks and of the US to transfer the armored personnel carriers. While Berlin has previously blocked some arms deliveries to Ukraine by third countries, InfoDefensa states that both Germany and the US are expected to approve the Spanish donation.

Spain put 53 of its 108 Leopard 2A4 tanks into storage in 2012, and some of these machines have since been stripped of their weapons and spare parts. The 1970s-era tanks will need extensive repair work before they can be put to use by Ukraine, and InfoDefensa claims that as many as 20 tanks may need to be stripped for parts in order to make 10 operational.

The M113 armored personnel carriers are older still, having been first fielded by the US in the early 1960s. An estimated 80,000 have been produced, with Spain taking delivery of over 1,200 starting in 1969.

Spain donated 200 tons of arms and ammunition to Ukraine in April, to a lukewarm reception in Kiev. “We are grateful but we cannot say that we are satisfied,” Ukraine’s ambassador to Spain, Sergey Pogoreltsev, said last month. Describing the Spanish arms haul as sufficient for two hours of fighting, Pogoreltsev called on Madrid to send tanks, howitzers and mortars.

“We are not asking for anything that Spain cannot provide,” the Ukrainian diplomat claimed, before lamenting how Spain has “one of the lowest rates of aid to Ukraine in relation to its military budget.”