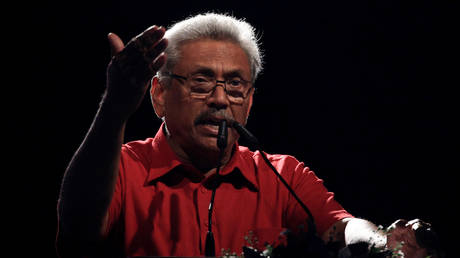 His resignation was announced by Sri Lankan news outlet Newsfirst, which cited Speaker of Parliament Mahinda Yapa Abeywardena. It came hours after Prime Minister Ranil Wickremesinghe declared that he would also be willing to step down, paving the way for an interim government followed by elections.

Sri Lanka has been rocked by protests for several months, with the unrest driven by soaring inflation and shortages of food, fuel, and medicine. The country defaulted on its foreign debt in May, and fuel rationing was introduced earlier this month, with armed troops deployed to filling stations.

The economic crisis has been blamed partly on the Covid-19 pandemic and the resulting fall in tourism revenue for the island nation. However, Rajapaksa’s government has been fiercely condemned for its policies of lavish spending and careless tax cuts, while printing money to pay off foreign bonds.

Changes in the country’s government did little to allay public anger, and protests continued through May and June after the president’s brother, Mahinda Rajapaksa, stepped down as Prime Minister, handing the job to Wickremesinghe.

A crowd believed to number around 100,000 descended on the presidential palace earlier on Saturday, as officials told reporters that the president had been “escorted to safety.” With his whereabouts unknown, the demonstrators forced their way into the building, where they raided its kitchen and swam in his private pool.

According to Newsfirst, Rajapaksa will leave office on Wednesday. Parliament will likely choose a caretaker president, and Speaker Abeywardena will likely take over as prime minister, local media reported.