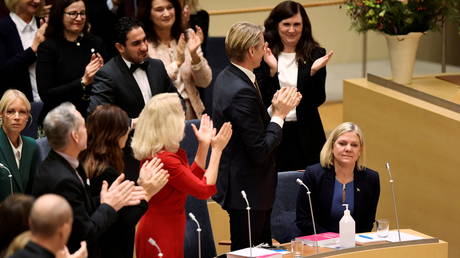 “I have told the speaker that I wish to resign as prime minister,” Andersson told reporters on Wednesday in Stockholm, after the coalition led by her Social Democratic Party unraveled. The 54-year-old  Andersson is reportedly seeking new support after the Green Party quit the new ruling minority coalition in the wake of a budget defeat.

The coalition was to govern on a razor-thin margin of support after the new PM was elected on Wednesday with more votes against her than for her in parliament. The vote was 117 MPs for Andersson, Sweden’s finance minister, and 174 against her, with 57 lawmakers abstaining or absent. Swedish law allows prime ministers to be appointed and govern as long as a majority of the Riksdag – 175 MPs – doesn’t vote against them.

However, Andersson’s historic victory, making Sweden the last Nordic country to have a female head of state, was quickly followed by a legislative defeat, as the Centre Party declined to go along with other coalition members in supporting the government’s budget proposal. MPs instead passed a rival budget proposed by three conservative parties, including the Sweden Democrats.

Although Andersson had said she could govern the country with the opposition budget, the Greens balked, with co-leader Marta Stenevi telling reporters the party sought power in order to push through its own policies. “It is not the Green Party’s job in politics to implement a budget negotiated with the Sweden Democrats.”

Andersson subsequently said she didn’t want to lead a government “where there may be grounds to question its legitimacy.” She reportedly told Riksdag Speaker Andreas Norlen that she’s interested in leading a one-party Social Democratic government. Sweden has a general election scheduled for next September.

The Social Democrats had chosen Andersson to replace Stefan Lofven, who stepped down as prime minister and party leader earlier this month. Lofven announced his intention to resign in August amid political infighting, including a no confidence vote against him, and hoped to give his successor “the best of conditions” heading into next year’s election.