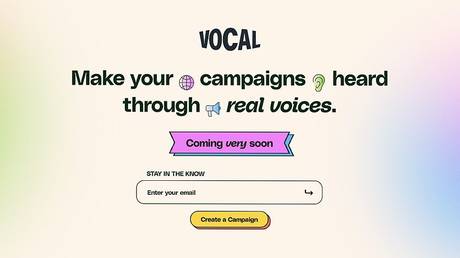 A US public relations firm that wanted favorable press coverage of its effort to promote Democrat policies on TikTok scrubbed its website after Vice magazine pointed out on Tuesday that this probably violated the platform’s rules.

Vocal Media’s new website promises to “make your campaigns heard through real voices.” Previously, the company used to boast of partnerships with a variety of groups pushing Democrat political messaging, such as MoveOn and Planned Parenthood, according to Vice’s Motherboard.

Tiktoks of a father praising the Democrats’ proposed expansion of child tax credit, a Tesla owner dreaming of more charging stations due to the infrastructure bill, a woman jumping off her couch after Ketanji Brown Jackson was nominated to the US Supreme Court, and even a Taylor Swift fan criticizing the Republican candidate for Virginia governor all turned out to be masterminded by Vocal, according to Motherboard. None of the videos were clearly labeled as sponsored content.

After Motherboard contacted TikTok for comment, “several” posts backed by Vocal were removed, the outlet said.

“Political discourse is allowed as long as it complies with our community guidelines and is organic content, meaning there is no sponsorship or paid promotion behind it,” a spokesperson for TikTok said in a statement.

Motherboard pointed out that Democrat organizations are “employing strategies, like covert paid ad campaigns, that would presumably be found distasteful or immoral – or described as disinformation – if utilized by someone from across the aisle.”

Joshua Karp of the PR company Hone Strategies, acting as a spokesman for Vocal Media, defended the group’s work. He told Motherboard in an email that the company did not script the videos, but merely partnered with “influencers creating authentic content about issues that are important to the creators themselves, and helps connect these creators with organizations and nonprofits who are working directly on these issues.”

Hone Strategies was founded by and employs former Democratic campaign staffers who boast of their “deep understanding of opposition research.” Karp’s own public biography says he worked for several Democratic campaigns, as well as American Bridge 21st Century – the SuperPAC led by the notorious Democrat operative David Brock.

After Motherboard began reporting on Vocal Media’s activities, the group scrubbed its website. Karp said this was unrelated and part of a move to a new hosting platform.

The current US government has targeted the TikTok demographic by enlisting popular creators to spread its messages on a number of issues, from Covid-19 vaccination to the conflict in Ukraine, specifically blaming US inflation and rising gas prices on Russia.