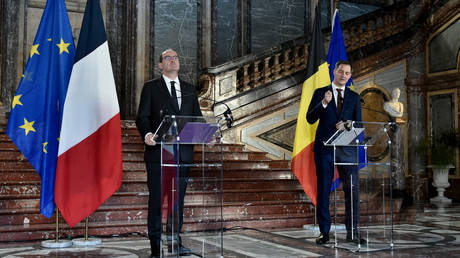 French Prime Minister Jean Castex has tested positive for Covid-19 after returning from a trip to Belgium. Five Belgian ministers, including PM Alexander De Croo, have self-quarantined as a precaution as well.

Castex, who is fully vaccinated, announced on Monday that he tested positive for the virus. He will be quarantined for 10 days but continue to work, his office said in a statement.

The French PM found out his daughter had tested positive for the coronavirus when he returned from Brussels, where he met with De Croo and other ministers. In response to his announcement, five Belgian ministers have entered precautionary quarantine and will be tested on Wednesday, a government spokesperson said.

Castex, 56, was not yet eligible for booster vaccines French President Emmanuel Macron has advocated as an alternative to lockdowns along the lines implemented by Austria and Germany in response to the rising number of Covid-19 cases on the continent. France currently offers boosters only to those 65 and older, though an advisory body has urged extending them to anyone over 40.