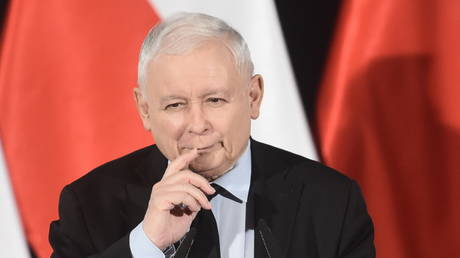 Kaczynski took aim at Sikorski on Sunday during a public meeting with supporters in the northwestern city of Stargard. The conservative politician blasted a now-deleted tweet that Sikorski posted last week in response to the apparent sabotage of Russia’s Nord Stream pipelines. Sikorski posted a photo of the site of the incident with the message: “Thank you, USA.”

The PiS leader told the audience that Russia’s representative to the UN, Vassily Nebenzia, used Sikorski’s tweet to attack Washington during Friday’s session of the UN Security Council.

“[Sikorski] could not have done a better thing [for Russia]” Kaczynski said, as cited by Polish media. “Why did he do that? I don’t know, but I know that he did.”

He dismissed remarks made by former Prime Minister Donald Tusk, who Sikorski served under as foreign minister. Tusk described the tweet as a gesture of unnecessary “extravagance.”

Kaczynski said that a diplomat would be considered ‘extravagant’ if he were to come to a reception in his underpants, but what Sikorski did went beyond this, drawing laughter from the audience.

The issue came up again during the meeting, when a journalist asked Kaczynski about US claims that since 2014, Russia spent around $300 million on influencing politicians in other nations. He joked that he does not believe Sikorski “was worth that much,” but suggested that digging into his potential ties with Russia could be worthwhile.

Accusing political opponents of cozying up with Russia is a long-held tradition in Poland, and it works both ways. Amid the scandal over Sikorski’s tweet, his wife, American journalist Anne Applebaum, claimed that conservative Polish politicians have secret links with the Russian government.

“In some countries (Poland for example) the Right tries to hide its links to Russia and admiration for Putin. In the US they no longer bother,” she tweeted on Sunday, in an attack also directed at the Conservative Political Action Conference.

Some Polish media outlets took her comments to be an attempt to deflect criticism away from Sikorski.