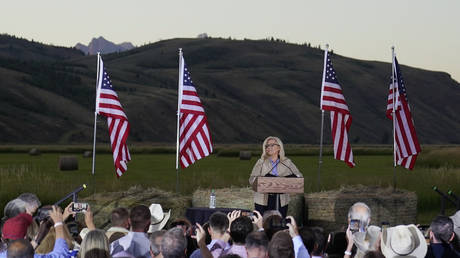 GOP Rep. Liz Cheney of Wyoming was ousted in the state’s primary race

Republican Congresswoman Liz Cheney has lost her bid for another term in Congress after a poor showing in the Wyoming state primary, according to several outlets that called the race, with her opponent, the Donald Trump-backed Harriet Hageman, appearing to win by a significant margin.

With the vast majority of ballots in, Cheney took less than 30% of Tuesday night’s votes, with her GOP opponent Hageman securing more than 65%, NBC News reported, citing stats from the National Election Pool.

A major detractor of former President Donald Trump, Cheney lost out to a candidate with support from the ex-commander in chief, and argued that she may have fared better if she had been willing to echo Trump’s charge that the 2020 presidential race was marred by widespread fraud.

“Two years ago, I won this primary with 73% of the vote. I could easily have done the same again,” she told a crowd in Jackson, Wyoming after conceding her loss, adding “The path was clear, but it would have required that I go along with President Trump’s lie about the 2020 election.”

Cheney was previously the number-three ranked Republican in Congress, but lost significant support among fellow Republicans after voting to impeach Trump while accusing him of inciting the January 6 riot at the US Capitol. She later joined the congressional committee probing the incident, and serves as its vice chair.

Hageman declared victory through a prepared statement, saying that Tuesday’s vote “has put the elites on notice: We are no longer going to tolerate representatives who don’t represent us.”

Former President Trump also ran a victory lap after the race, hailing Hageman’s “decisive win” while stating that Cheney “should be ashamed of herself.”

“Now [Cheney] can finally disappear into the depths of political oblivion where, I am sure, she will be much happier than she is right now,” he added.

However, with her final term set to end early next year, Cheney’s role on the January 6 panel will continue over the coming months.

The primary result in Wyoming will not come as a shock for many, as a number of recent polls indicated that Cheney faced a major uphill battle against her Trump-backed challenger, including a survey published last week which predicted a gaping 30-point spread between the two.