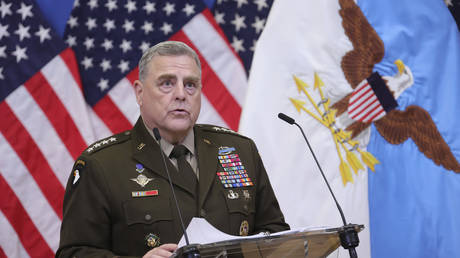 Conflict with the United States would be a “really bad choice” for Beijing, America’s highest-ranking officer said

US Chairman of the Joint Chiefs of Staff Mark Milley has said the Pentagon will support Taiwan’s military with both weapons and training, warning of a Chinese attack on the island while accusing Beijing of seeking “global military superiority.”

Speaking at an event held by the Economic Club of New York on Wednesday, the American general stressed that Washington would continue to strengthen security cooperation with Taipei, despite vocal objections from Beijing, which considers the island part of China’s sovereign territory.

“The US is committed through the Taiwan Relations Act, and President [Joe] Biden has said on many occasions recently that the United States will continue to support Taiwan,” Milley said, referring to US legislation outlining the relationship with Taipei. “We will support them militarily” and “try to help train them and equip them.”

Milley went on to claim that while there’s no indication Beijing will attack the island in the immediate future, Chinese President Xi Jinping is now “evaluating the situation and recalculating what they might do,” noting that an assault across the Taiwan Strait would be “really difficult.”

“It’s really hard. And I think they’re coming to realize that,” he continued, adding that preparations for an attack and actually carrying one out are “two different things.”

Last year, Taiwanese leader Tsai Ing-wen claimed that US servicemen were already training troops on the island, but declined to specify how many Americans were deployed, only saying it was “not as many as people thought.” Moreover, the chief of the US Special Forces, Christopher Maier, also suggested the Pentagon should send US advisors to instruct Taiwanese soldiers on how to repel an “amphibious landing” in May of 2021. It is unclear whether that proposal was ever taken up.

The US general stressed a key talking point repeatedly echoed by officials in Washington, insisting Beijing is America’s top competitor and security concern. He said the country is seeking “regional” – and eventually “global” – military “superiority,” arguing it would like to achieve the latter before the year 2050.

“We’re fine with competition – no problem,” he said. “But if China wants conflict, then that would be a really bad choice for China.”

US officials have increasingly been treating the island as a sovereign nation in defiance of the “One China” policy, which Washington formally recognizes. US President Joe Biden even promised on several occasions that the American military would help repel a Chinese invasion, but White House aides have walked these statements back every time.

During his report at the Congress of the Communist Party of China last month, Chinese President Xi Jinping highlighted the risk of an armed conflict over Taiwan. He reiterated that Beijing’s primary goal was peaceful reunification, but warned that Beijing reserved the right to use military force to prevent possible attempts by the Taiwanese administration to declare independence. Last week, he ordered the country’s military to make sure it’s ready to respond to security threats arising from a new era of global turbulence.