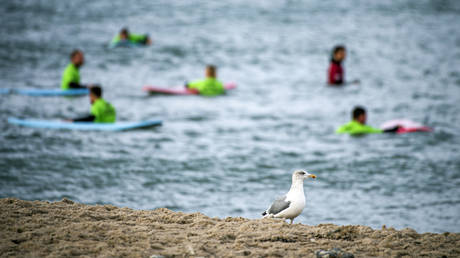 A Danish town has come under fire after local media exposed its beach-cleaning practices, with seaweed and trash dumped into the sea only to be washed ashore again. The process reportedly costs the town over $150,000 a year.

The beach-cleaning techniques of the Slagelse municipality, located on the western shore of Denmark’s largest island of Zealand, made national headlines over the weekend. Broadcaster Danmarks Radio (DR) released footage showing a bulldozer clearing Stillinge beach by scraping seaweed and other trash from it – and then dumping what it collected back into sea just meters from the shoreline.

The process is said to take place twice a week during summertime, reportedly costing the municipality around 1 million krones (over $150,000) a year. The town’s approach to beach-cleaning immediately came under fire from environmentalists, who blasted the futility and overall “idiocy” of the process.

“It’s completely idiotic, because it’s coming back again. You may take it a little further down the beach, but the seaweed will come ashore again afterwards,” Professor Torkel Gissel Nielsen of the National Institute of Aquatic Resources told DR.

People living near the beach were not exactly happy with the cleaning technique either, telling the broadcaster the bulldozer simply dumps into the sea anything found on the beach along with the seaweed, including cigarette butts and scraps of plastic.

“The problem is that what is dumped is filled with everything else lying on the beach,” a holiday homeowner Trine Winther told DR.

The municipality has defended the controversial cleaning process, however, insisting it was an absolute necessity to attract tourists by providing them with a pristine beach.

Deputy mayor of the town, Villum Christensen, who also presides over a local business committee responsible for the cleanup, rejected allegations that the town has been deliberately dumping plastic into the sea.

Larger trash is removed during beach cleaning, he told DR, arguing that smaller bits and pieces such as cigarette butts will end up washed back into the sea anyway.