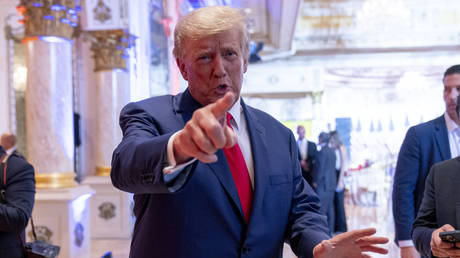 Former US President Donald Trump has urged voters to remain in line at polling places to ensure their ballots are cast, following reports that many voting machines were not working properly in Arizona and allegations of irregularities in other locations across the country.

Trump took to social media on Tuesday with a plea for voters, suggesting that Democrats are seeking to “delay” Republican votes with “very unfair” tactics while stating that Arizona residents in particular must remain at polling stations until they are certain their votes have been officially submitted.

“Don’t leave your line, stay where you are. They say that the machines aren’t working, they say that they’re running out of paper in different locations throughout different states. There’s a lot of bad things going on,” Trump said in a brief video message, adding “I know you don’t want to be there as long as they’re going to try and force you. They want to delay you out of voting, and you cannot let them delay you out of voting.”

TRUMP TO ARIZONA VOTERS: “Don’t leave your line. Stay where you are. They say that the machines aren’t working. They say that they’re running out of paper. […] It’s very, very unfair what’s going on.” pic.twitter.com/bevAzkBjHy

The ex-commander in chief went on to claim that many voters had already left polling places in Arizona’s Maricopa County – the state’s largest by population – adding that “it’s very, very unfair what’s going on” there, suggesting Republicans were being turned away before they could cast their vote.

Maricopa is one among multiple counties across the US reporting problems with its voting machines, with local officials noting that about one in five tabulation machines at 223 voting locations in the county were rejecting ballots on Tuesday night. They advised voters to submit ballots to be counted later, presumably prompting Trump’s urgent message to residents.

Mercer County, New Jersey – home to the state capital of Trenton – also saw system outages affecting the entire area on Tuesday. Local officials offered few details about the technical glitches, saying only that there was a “software issue with the voting machines.”

Luzerne County in Pennsylvania, meanwhile, was forced to extend its polling hours after multiple precincts ran out of the paper needed to print ballots, causing significant delays and prompting a local judge to order voting locations to remain open two hours past their initial closing time.

Arizona GOP chair Kelli Ward said it was “ridiculous” that so many polling locations were affected, and Republicans in the state have filed an emergency motion to extend voting hours in Maricopa to 10pm local time. The GOP members argued that “at least 36% of all voting centers across Maricopa County have been afflicted with pervasive and systemic malfunctions of ballot tabulation devices and printers, which has burdened voters with excessive delays and long lines,” and requested that the public release of early ballot results be pushed back until 11pm.