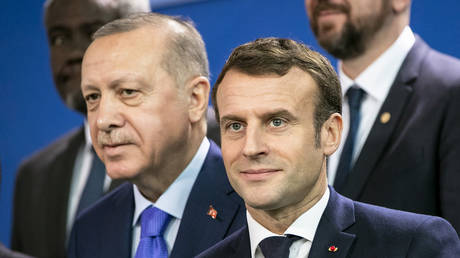 Paris should deal with its own colonial past instead of accusing other nations, Ankara said

Statements French President Emmanuel Macron made this week during a visit to Algeria demonstrate not just the fact that France had apparently failed to face its own colonial past but also his own “distorted mentality,” the Turkish Foreign Ministry said in a damning statement over the weekend. The angry reaction was sparked by Macron accusing Turkey of spreading “anti-French propaganda” in Africa.

Macron claimed Turkey – alongside Russia and China – are building certain “activist networks” that supposedly pursue a “neo-colonialist” and “imperialist” agenda while spreading “anti-French propaganda” and portraying Paris as an “enemy” of Africa.

The Turkish ministry called Macron’s accusations “most unfortunate” and “unacceptable,” adding that the French president apparently “has difficulties in confronting his colonial past in Africa, especially in Algeria.” France seeks to deal with this matter by accusing other nations of malicious activities, the ministry’s statement added.

“If France supposes that there are reactions against it in the African continent, it should search for the source of these reactions in its colonial past and its efforts to still pursue this with different methods,” the statement said. Any attempts to explain anti-French sentiments in Africa by some “third nation’s activities” is nothing but a denial of history that only shows the “distorted mentality of some politicians,” it added.

Turkey is a strategic partner of the African Union and encourages “friendship, not hostility” on the continent, the ministry said. Ankara hopes that Paris would eventually “reach the maturity to face its colonial past without blaming other countries,” it added.

Although the ancestors of modern Algerians had a “struggle” with the former colonizer in the past, now Africans “are being taught baseless things” about France, Macron told journalists during his visit to the Algerian capital, Algiers.

His visit came amid strained relations between the countries. Last year, Macron questioned Algeria’s existence as a nation before French colonial rule and accused its government of fomenting “hatred towards France.” In response, Algiers recalled its ambassador from Paris and banned French military aircraft from its national airspace.

Relations have since been restored, along with French military aircraft overflights through Algerian airspace to French bases in sub-Saharan Africa. Following this week’s visit, Macron and Algerian President Abdelmadjid Tebboune declared a new “irreversible dynamic of progress” in bilateral relations.