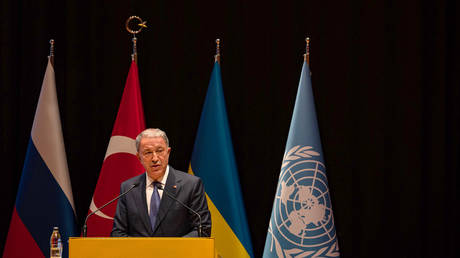 Since the beginning of the month, 27 grain ships have departed from Ukraine’s Black Sea ports under a UN- and Turkish-brokered deal signed by Moscow and Kiev, Turkey’s defense minister revealed on Saturday, adding that this development lays “the groundwork for a permanent peace environment.”

“Since August 1, a total of 53 vessels have sailed for grain shipments, 27 of which have departed from Ukrainian ports,” Defense Minister Hulusi Akar said at Istanbul’s Joint Coordination Center, speaking alongside UN Secretary General Antonio Guterres.

The center, which was established in late July as part of the grain deal, is charged with overseeing shipments from Ukraine to global markets and maintaining safe transit routes for deliveries across the Black Sea.

Guterres touted the shipping operations as “remarkable and inspiring,” adding that more than 650,000 metric tons of grain and other food products “are already on their way to markets around the world.”

“Just yesterday, I was in Odessa port and saw first-hand the loading on a cargo of wheat onto a ship. I was so moved watching the wheat fill up the hold of the ship,” he said. “It was the loading of hope for so many around the world.”

The secretary general’s comments were echoed by Akar, who noted that the unimpeded exports would help alleviate “the food crisis affecting the whole world, especially [for] lowering prices.”

Wheat deliveries from Ukraine, a major producer, were disrupted after Russia launched its military operation in the neighboring state in late February. The sides blamed each other for causing the crisis.

The deal to unblock grain exports via the Black Sea was signed at UN-brokered talks in Istanbul in late July, and aims to maintain safe transit routes. The agreement is also supposed to allow Russia to deliver fertilizers and food products to global markets.

However, earlier this week, the Kremlin, commenting on a call between Russian President Vladimir Putin and his French counterpart, Emmanuel Macron, noted that “obstacles for the Russian grain [exports] persist,” which has an adverse effect on the world’s food security.

Guterres addressed this problem to some extent, reiterating that “it is important that all governments and the private sector cooperate to bring” food and fertilizers to market.

“Without fertilizer in 2022, there may not be enough food in 2023,” he warned. “Getting more food and fertilizer out of Ukraine and Russia is critical to further calm commodity markets and lower prices for consumers.”