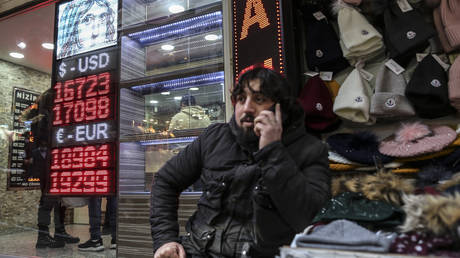 Washington is concerned that Ankara is allowing Russians to escape its economic penalties, according to the US Treasury

Turkish Deputy Finance Minister Yunus Elitas has told US Deputy Treasury Secretary Wally Adeyemo that Ankara won’t allow the “breaching” of American sanctions on Moscow but that its “balanced” position on the Ukraine conflict remains unchanged.

Elitas and Adeyemo spoke by phone on Friday, several weeks after the Financial Times reported that Western officials are “increasingly alarmed” at Turkey’s growing trade ties to Russia, and are considering ways to retaliate if these ties help Russia bypass EU and US sanctions.

According to a readout of Friday’s call from the US Treasury Department, “Adeyemo raised concerns that Russian entities and individuals are attempting to use Turkey to evade sanctions put in place by the United States and 30 countries.”

Adeyemo also “reiterated the United States’ interest in the success of the Turkish economy” and “the integrity of its banking sector.” This statement could be perceived as a threat, considering that the officials quoted by the FT suggested that Western nations could potentially instruct their corporations and banks to pull out of Turkey over the supposed sanctions evasion.

The Turks appear to be cooperating. According to its own readout of the call, Turkey’s Finance Ministry said that “Elitas confirmed that Turkey’s position has not changed regarding the current processes and sanctions, but that it would not allow the breaching of sanctions by any institution or person.”

Turkish President Recep Tayyip Erdogan has previously described his position on the conflict in Ukraine as “balanced.” While Turkey has condemned Russia over the conflict and has sold some weapons to Ukraine, it is the only NATO member that has not sanctioned Moscow or closed its airspace to Russian flights.

Turkey continues to import Russian oil and gas, and following a meeting between Erdogan and Russian President Vladimir Putin earlier this month, the countries agreed to increase their bilateral trade to $100 billion by 2030 and cooperate on energy projects and counterterrorism initiatives. Erdogan and Putin also agreed that Turkey would pay for some of its gas imports from Russia in rubles.

Erdogan has also positioned himself as a middleman between Ukraine and Russia. Turkey hosted ultimately unsuccessful peace talks in March but later helped broker an agreement to resume shipments of grain to world markets via the Black Sea.