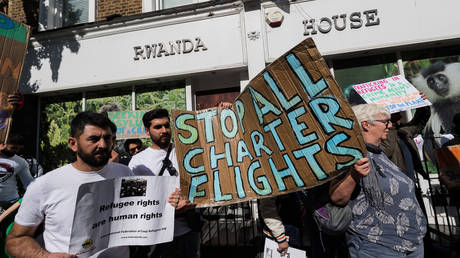 The British government won’t rule out leaving the European Court of Human Rights (ECHR) over the decision that blocked a flight that would have taken a group of asylum seekers to Rwanda, Downing Street said on Wednesday. Preparations for another flight are already underway, and it might take off before the UK Supreme Court finishes a judicial review of the policy, which the ECHR insisted must happen first.

“The judgements relate to individuals… not broader policy,” a spokesman for Prime Minister Boris Johnson told reporters on Wednesday, referring to Tuesday evening’s order by the ECHR to stop the transfer flight.

“We haven’t ruled anything in or out at this stage,” the spokesman said when asked if the UK government had plans to leave the court.

The first flight to Rwanda carrying asylum seekers was supposed to take off from a military airport in Wiltshire on Tuesday evening, only to be stopped by a last-minute injunction from the ECHR. The court said one Iraqi man on board may not have access to “fair and efficient procedures for the determination of refugee status” in Rwanda, and said he should not be sent there until the UK Supreme Court could rule on whether the government’s policy is legal. That decision is due in July.

The ECHR also called Rwanda a questionably safe destination for migrants, since it is not a signatory to the European Convention on Human Rights.

Johnson’s government had struck a deal with Rwanda in April, under which the UK would fly illegal immigrants to the African country, where they would await asylum processing. London would pay Kigali £120 million ($148 million) under the arrangement, which Downing Street said would discourage human trafficking and deter illegal crossings.

Home Secretary Priti Patel called the ECHR ruling “disappointing and surprising” and defended the Rwanda policy as “firm” and “fair.”

“We believe that we are fully compliant with our domestic and international obligations, and preparations for our future flights and the next flights have already begun,” she said in the House of Commons. “We will not accept that we have no right to control our borders,” she added.

The opposition Labour Party has denounced the policy, however, with shadow home secretary Yvette Cooper calling it “shameful” and a “shambles.” After losing the fight to block the policy in British courts, human rights and immigration activists took it to the ECHR.

The court was created to enforce the human rights treaty written mainly by British civil servants and lawyers after the Second World War. If the UK leaves the treaty – and the court with it – London would follow in the footsteps of Moscow, which withdrew in March. Russia said that, going forward, ECHR rulings would only be valid if they aligned with its constitution. It will formally cease to be a contracting party to the ECHR in September 2022.