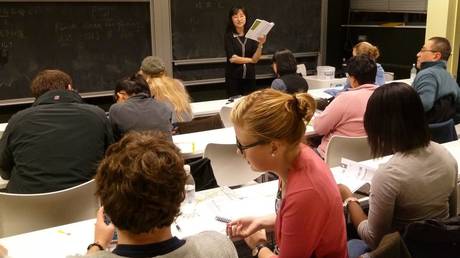 MPs are in talks to replace Beijing-backed teachers with professionals from Taiwan, The Guardian reports

British MPs are in talks with Taipei to replace Beijing-backed Chinese language teachers working in the UK with personnel from Taiwan, The Guardian has reported.

Mandarin is currently taught to British students through 30 branches of the Confucius Institute, which are joint ventures by host universities in the UK, their counterparts in China, and the Beijing-based Chinese International Education Foundation (CIEF).

Funding for the project between 2015 and 2024 is estimated at £27 million ($31 million), according to the China Research Group.

But now London is looking to redirect this money to alternative programs, including those from Taiwan, The Guardian said.

The group of cross-party MPs, who are now involved in talks with Taipei to provide Chinese language teachers, include prominent Tory lawmaker Alicia Kearns, it added.

New UK Prime Minister Liz Truss praised the Confucius Institute when she was education minister in 2014. Back then, she said that the project had made “very strong progress” in the UK and said it would “put in place a strong infrastructure for Mandarin” in the country.

However, the Beijing-backed program has since come under increased scrutiny amid the recent cooling in relations between the UK and China, and Britain’s overwhelming support for the self-governed island of Taiwan, which the Chinese authorities view as part of their own territory.

Critics have accused the Confucius Institute of lacking freedom of speech in classes, promoting Beijing’s agenda and even being used for spying.

A report by the Times last month claimed that Truss was planning to label China an ‘acute threat’ to the UK, putting it in the same category as Russia. She had earlier branded Chinese tech giants as a security risk and called for more weapons to be sent to Taipei.