Ukraine to decide how much territory it trades for peace – NATO 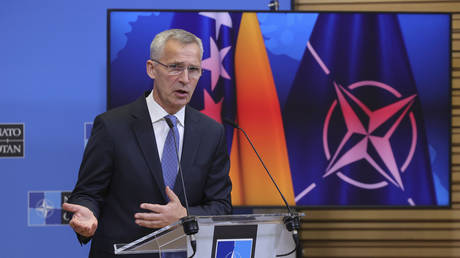 Alliance chief Jens Stoltenberg said that peace comes at a price, but insisted it’s up to Ukraine

NATO Secretary General Jens Stoltenberg said on Sunday that the US-led alliance aims to strengthen Ukraine’s position at the negotiating table, but added that any peace deal would involve compromises, including of territory.

Stoltenberg spoke at the Kultaranta Talks in Finland, following a meeting with Finnish President Sauli Niinisto. While the NATO chief said that the West was willing to “pay a price” to strengthen the Ukrainian military, Kiev will have to make some territorial concessions to Moscow in order to end the current conflict.

Stoltenberg did not suggest what terms Ukraine should accept, saying that “it’s for those who are paying the highest price to make that judgment,” while NATO and the West continue supplying arms to the Ukrainians to “strengthen their hand” when a settlement is eventually negotiated.

The secretary general did not directly endorse the ceding of Ukrainian territory, but he did bring up the example of Finland, which gave up Karelia to the Soviet Union as part of a peace deal during the Second World War. Stoltenberg described the Finnish-Soviet settlement as “one of the reasons Finland was able to come out of the Second World War as an independent sovereign nation.”

Stoltenberg’s statement comes amid growing sentiment that Ukraine may soon be pressed into a peace deal by its Western backers. While US and British officials publicly insist that Ukraine “can win” its war with Russia, a recent CNN report suggests that officials in Washington, London and Brussels are meeting without their Ukrainian counterparts in an effort to plan a ceasefire and peace settlement.

Ukrainian President Volodymyr Zelensky has also claimed that unnamed foreign parties have been trying to “push us a little” toward a deal, as the public in countries backing Ukraine grows “war weary.”

French President Emmanuel Macron has publicly denied urging Zelensky to give up some territory in exchange for an end to hostilities, as former US Secretary of State Henry Kissinger suggested last month he should do.

Kissinger proposed in May that Ukraine accept a return to the “status quo ante,” meaning it would relinquish its territorial claims to Crimea and grant autonomy to the Donetsk and Lugansk People’s Republics. Crimea has been a part of Russia since 2014, while Moscow recognized the independence of Donetsk and Lugansk People’s Republics several days before its military operation began in February.

Zelensky has shifted positions several times on a potential peace deal, with the president periodically expressing interest in negotiating a settlement with Russia, only for his officials, the US State Department, or Zelensky himself, to express the opposite sentiment shortly afterwards. After announcing his willingness to enter negotiations late last month, Zelensky came out several days later and told his citizens that “there will be no alternative to our Ukrainian flags” flying over the Donbass republics.

“We understand that it is very difficult for Ukraine after all this fighting to give up their land,” Niinisto said during the discussion with Stoltenberg on Sunday. “But seeing that Russia would lose all its holdings is not at this point foreseeable. Gaining peace is absolutely difficult.”