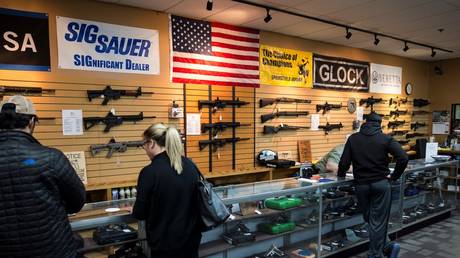 Gun control advocates are leaning on credit card companies to flag legal purchases of guns and ammunition as “suspicious,” a campaign from anti-gun lobbyists GunsDownAmerica and Giffords has revealed. The activists argue that mass shooters have “exploited” the banking system to obtain their arsenals and that it’s up to the industry to stop them.

Giffords tweeted a link on Sunday to GunsDownAmerica’s campaign to pressure MasterCard, Visa, and American Express into flagging these purchases “in the same way that they report known patterns of identity theft, fraud, or human trafficking to law enforcement officials.” The groups are partners on the campaign.

In order to flag the purchases, the companies would have to re-classify some 9,000 standalone gun shops under a specific Merchant Category Code, the identifier used by payment processors to analyze customer spending. There is currently no specific code for gun stores, which are usually listed as “sporting goods” shops – a loophole that gun control proponents insist must be closed.

GunsDownAmerica has accused the credit card processors of blocking an effort already underway to close it, claiming to be working “closely” with union-owned Amalgamated Bank and Giffords to create the category code. Their failure to embrace such “life-saving reforms” amounts to “empowering mass shooters,” the group charged.

GunsDownAmerica’s website partially unpacks those statistics, reporting that Pulse nightclub shooter Omar Mateen charged $26,000 in guns and ammo over just 12 days while he planned his massacre. Other shooters whose purchases were used as examples of missed opportunities for financial companies to save lives would have been less obvious to the average analyst. Las Vegas shooter Stephen Paddock charged $94,000 on credit cards in accumulating his arsenal, but that was over a 12-month period, lessening the chance of discovery via pattern recognition.

The campaign is not GunsDownAmerica’s first effort to use public shaming to pressure the financial sector into cracking down on gun sales, an aim that has thus far been impossible to achieve through legislative channels. Shortly after it was founded in 2018, the group petitioned Visa to refuse to process sales from companies that sold or manufactured “assault weapons,” a non-technical term usually used to refer to AR-15 and similar semi-automatic rifles. Visa declined to participate.