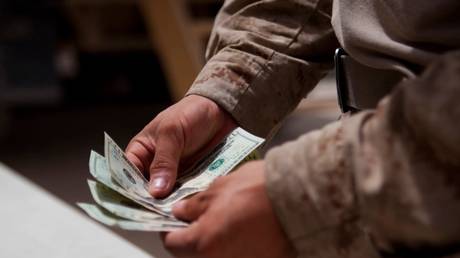 The head of the US Air Force has outlined some of the greatest concerns facing American soldiers – and they don’t include Russia or China. Instead, servicemen are increasingly fearful of their economic future, given skyrocketing living costs amid a severe bout of price inflation.

Delivering the keynote address at the Air and Space Forces Association’s Air, Space and Cyber conference on Monday, Air Force Secretary Frank Kendall said many troops are finding it increasingly difficult to cover basic expenses, noting that the military leadership can’t expect soldiers “to give their all to the mission when they are worried about paying for gas to get to work, finding childcare or providing their family a safe place to live.”

“The most common concerns I’ve heard from airmen and guardians about our inflation, housing cost or conditions and childcare,” Kendall said, adding: “The past several months of inflation has put unique pressures on the finances, and some of our eminent guardians and critical specialties.”

Citing high inflation rates and surging mortgage costs – which recently rose above 6% for the first time since 2008 – the official said the Air Force would restore cuts to “special duty assignment pay,” which previously allowed some soldiers a way to earn additional money.

“Our system to adjust special duty pay was out of sync with the rapid changes in our economy brought on by Covid and the invasion of Ukraine. That’s why I’m announcing today that the [Department of the Air Force] will restore all the cuts to special duty assignment pay that were scheduled to take place on 1 October,” Kendall continued.

While the 2023 National Defense Authorization Act calls for some of the largest pay increases for soldiers in nearly 20 years, the bill has yet to pass Congress. In the meantime, Kendall said the military would launch a “basic needs allowance program” for soldiers who are particularly hard-up, and would work to “ensure basic allowance for housing also keeps pace with costs.”

Inflation rates in the US have slightly declined from the summer, when they reached four-decade highs as prices for food, fuel and housing went soaring. According to government statistics, in June consumer prices were up by 9.1% compared to the previous year, the largest annual jump since 1981.