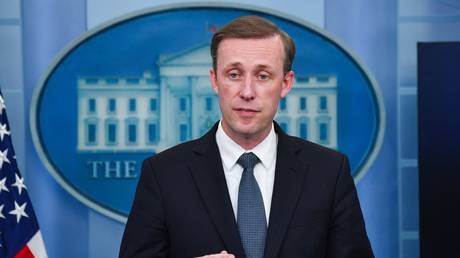 There is a “distinct threat” that China could attempt to seize Taiwan by military means, a top US official has warned.

Appearing on ‘The David Rubenstein Show: Peer-to-Peer Conversations’ on Bloomberg TV, US National Security Advisor Jake Sullivan said: “I think it remains a distinct threat that there could be a military contingency around Taiwan.” He added the leadership in Beijing has “actually stated as official policy that it is not taking the invasion of Taiwan off the table.”

Sullivan also revealed that he would meet congressional leaders on Wednesday to advocate a bill that, if passed, would see US policy toward the self-governing island change. Among other things, he proposes designating Taiwan as one of America’s major non-NATO allies. The bill also calls for the allocation of $4.5 billion in security aid for Taipei.

When asked to clarify Washington’s position on the issue, Sullivan replied by saying that the Biden administration continues to “push back against any effort to change the status quo by force.”

While the Chinese Embassy in Washington did not immediately respond when Bloomberg reached out for comment, Beijing’s envoy stateside, Qin Gang, warned last month that the US had gone “too far” in the region. The diplomat stressed at the time that should the Biden administration further escalate the situation, China would be forced to respond. The ambassador also denied as “baseless” allegations that Beijing is planning a military offensive against Taiwan in the near future.

Taiwan has been de facto independent since 1949, after the losing side in the Chinese Civil War fled to the island and set up its own administration there. While only a handful of nations have since recognized Taiwan as a sovereign country, Taipei has long enjoyed close, unofficial ties with the US, with the latter supplying weapons to the island.

Meanwhile, on paper, Washington still adheres to the One-China principle.

Beijing considers Taiwan to be part of its sovereign territory which was temporarily seized by separatists.