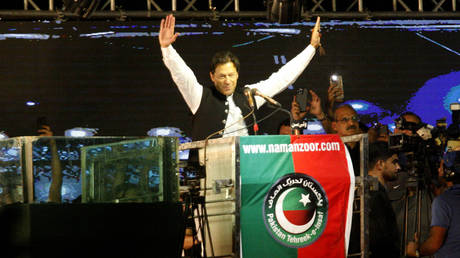 Former Pakistani Prime Minister Imran Khan has said the US threatened his government with “consequences” unless he is removed from power. Khan lost a no-confidence vote in April.

“In the past 40 years, our leadership has basically bowed down to everything the US has demanded of us,” Khan told the Sunday Times.

The former PM accused Washington of “imperial arrogance” and meddling in his country’s domestic affairs.

Khan said his ambassador in Washington sent him a diplomatic cable in April about a meeting with US Assistant Secretary of State for South and Central Asian Affairs Donald Lu.

According to Khan, Lu told the diplomat that Pakistan would suffer “consequences” unless the PM is removed from office. Lu assured him that “all would be forgiven” should he be ousted, Khan claimed.

Khan said his criticism of the war in Afghanistan was among the things that drew the ire of Washington. “The Americans never understood the culture of the country or the people they were dealing with,” he argued.

A former cricket star, Khan rose to power in August 2018, when his Pakistan Tehreek-e-Insaf (PTI) party won the election. Four years later, he was dismissed by parliament amid accusations of economic mismanagement.

The US rejected Khan’s repeated claims that his downfall was orchestrated by Washington. “Let me just say very bluntly there is absolutely no truth to these allegations,” State Department deputy spokesperson Jalina Porter said in April.

Pakistan’s relations with President Joe Biden have also been tense, according to reports.
“We don’t see ourselves building a broad relationship with Pakistan, and we have no interest in returning to the days of hyphenated India-Pakistan,” Deputy Secretary of State Wendy Sherman told reporters during her visit to Islamabad last year.