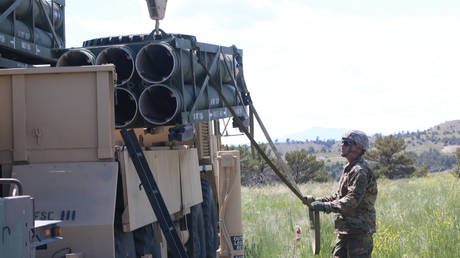 Even if the deal goes through, the number still pales in comparison to what Kiev has asked for

The Pentagon is considering whether to send four additional M142 HIMARS rocket launcher systems to Ukraine, Politico reported on Saturday. The US has already pledged four such systems to Kiev’s military, but Ukrainian officials want far more.

The US announced at the beginning of June that it would send four of the HIMARS systems, each of which can fire a salvo of six rockets from the back of a truck. The US said it would provide GMLRS guided rockets with the systems, which have a range of between 32km and 60km. The HIMARS platform can also fire a single guided missile with a range of up to 300km, but the US has not yet provided Ukraine with these projectiles.

Unnamed Pentagon officials told Politico that the Defense Department was considering sending another four HIMARS systems as part of a forthcoming US aid package. The decision, which has not yet been finalized, will be “based on Ukrainian immediate needs,” one of the officials said.

The arms donation will likely be funded from a $1 billion “security assistance” sum announced by US President Joe Biden on Wednesday. Biden said that the seven-figure “security assistance” package would go toward “additional artillery and coastal defense weapons, as well as ammunition for the artillery and advanced rocket systems that the Ukrainians need to support their defensive operations.” The $1 billion package was announced by Biden less than a month after he signed a $40 billion spending bill to fund Ukraine’s military and economy, and on top of a $13.6 billion spending package approved by Congress in March.

Additionally, the UK has given Ukraine three US-made M270 Multiple Launch Rocket Systems (MLRS) – similar to the HIMARS – and Germany announced this week that it would also send three M270s, reportedly down from an original promise of four due to an ammunition shortage.

The first four US-provided HIMARS systems will reach Ukraine by the end of this month once their Ukrainian crews are trained, Joint Chiefs of Staff Chair Gen. Mark Milley said earlier this week.

Despite the outpouring of military support, Kiev has requested far more of these, and other, weapons systems. “We asked for 10 times more” HIMARS launchers, Ukrainian MP Alexandra Ustinova told Politico. “Four HIMARS is nothing,” she added.

Mikhail Podoliak, an aide to Ukrainian President Volodymyr Zelensky, pleaded with the West earlier this week for 1,000 155mm howitzers – nearly ten times the amount sent by the US so far, 500 tanks, and 300 multiple launch rocket systems (MLRS). Assuming Podoliak was referring to the M270 MLRS systems, he would be asking for just under a quarter of such systems in existence worldwide.

With Russian artillery battering Ukrainian positions in Donbass, and Ukraine losing as many as 1,000 soldiers per day, a divide has emerged in Washington over the conflict’s eventual end. CNN recently reported that US and European officials are pushing Ukraine to make peace with Russia, and NBC News reported this week that these officials are becoming “increasingly concerned that the trajectory of the war in Ukraine is untenable” and are “quietly discussing” asking Zelensky to cede territory to Russia as part of a peace deal.

However, neither US Defense Secretary Lloyd Austin nor Secretary of State Antony Blinken has departed from their position that Ukraine can win the conflict in a military sense, while other officials told NBC that the Biden administration is “planning for a long war” and intends “to ask Congress for more money.”

Previous Posts Trust in media plummeting worldwide as people avoid news – Reuters
Next Posts Got Wrinkles and Fine Lines In Early 30s? Here Are Scientifically-Backed Ways To Reduce Them