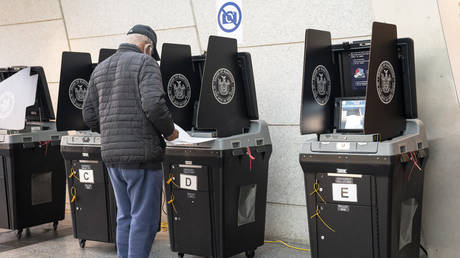 There is no evidence that voting machines used in the US midterm elections on Tuesday were compromised in any way, Jen Easterly, director of the Cybersecurity and Infrastructure Security Agency, said in a statement on Wednesday. However, she urged voters to be patient as counting the votes could take weeks.

“We have seen no evidence that any voting system deleted or lost votes, changed votes, or was any way compromised in any race in the country,” Easterly confirmed, just two days after warning reporters that “the current election threat is more complex than it has ever been.”

Speculation about threats to election integrity has been a bipartisan pursuit in the runup to Tuesday’s contest, with warnings about the possibility of hacking the wireless connections used to transmit preliminary election results joining the usual scare stories about Russian bots and Chinese influence operations.

Easterly reassured concerned voters that election officials were hard at work “tabulating votes, reviewing procedures, and testing and auditing equipment as part of the rigorous post-Election Day process that goes into finalizing and certifying the results.”

Unlike pre-2020 contests, in which the vast majority of Americans voted in person on Election Day, the midterms included a high volume of absentee and mail-in ballots, a practice widely embraced during the Covid-19 epidemic in 2020, though distrusted by some who believe it is more prone to fraud than the machines.

The anticipated “red wave” expected to return both houses of Congress to Republican control has thus far failed to materialize, though the party has a chance to come out on top with a few seats undecided. Opposition challengers failed to unseat Democrat governors like New York’s Kathy Hochul and Michigan’s Gretchen Whitmer as well as Republican stalwarts like Florida’s Ron DeSantis and Greg Abbott of Texas.

While those who questioned the legitimacy of the 2020 election results have been smeared as “election deniers,” questioning the 2016 election results is still allowed. On Sunday, the New York Times claimed that Russian “troll farm” the Internet Research Agency, accused of helping deliver the election for former president Donald Trump with a bunch of Facebook ads, had returned to social media to sow more discord among unsuspecting conservative voters.