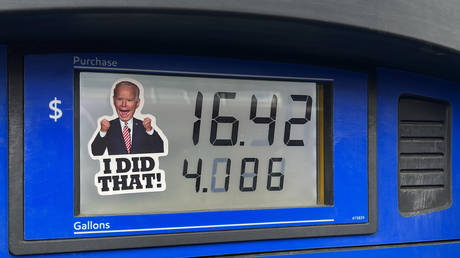 Joe Biden has asked oil companies to increase supply and lower prices at their own expense while threatening them with higher taxes. But will it help the Democrats’ election chances?

In direct opposition to the Democratic Party’s green agenda, US President Joe Biden has ordered the oil industry to ramp up production and lower prices – or else. But does the US leader have the power to control the free market?

As public sentiment over the US economy begins to boil, Biden is attempting to shift the blame onto the oil industry for hoarding profits while keeping prices at the pumps excessively high, thereby strangling economic growth.

“It’s time for these companies to stop war profiteering, meet their responsibilities in this country and give the American people a break and still do very well,” Biden told reporters in the White House this week. “If they don’t … they’re going to pay a higher tax on their excess profits and face higher restrictions.” The US leader said he would “work with Congress to look at these options that are available to us and others.”

It’s questionable, however, how the Democrats will be able to build bipartisan consensus for such penalties against the oil industry when the Republicans, who stand a good chance of winning the House come November 8, are openly hostile to any new “stifling” taxes.

Although gas prices in the US have decreased by $1.25 per gallon from a summer peak, the current national average is $3.76 per gallon, which is still more than 35 cents higher than this time last year. At a time when inflation has gone through the roof for everything from food to utilities, those extra pennies make a difference.

Meanwhile, the oil industry, which continues to post astronomical profits, rejects Biden’s claims that the American people are being left out of the bonanza. The CEO of Exxon Mobil Corp, Darren Woods, said his company is dividing profits among shareholders.

“There has been discussion in the US about our industry returning some of our profits directly to the American people,” Woods told Bloomberg News. “That’s exactly what we’re doing in the form of our quarterly dividend.”

The White House fired back on Twitter several hours later, saying: “Can’t believe I have to say this but giving profits to shareholders is not the same as bringing prices down for American families.”

Biden mentioned something in his White House speech that reflects his administration’s short-sighted expectations of the oil industry at a time when the Democrats are attempting to enforce its ‘green agenda’ on the American people.

“Record profits today are not because they’re doing something new or innovative. The profits are a windfall of war,” Biden said, in reference to the conflict now raging between Russia and Ukraine. The question many observers are asking is: Why didn’t the White House wait until those “new and innovative” technologies were online before canceling everything in one throw?

While the Democrats blame Russia, Big Oil, and OPEC for America’s current economic woes, on his first day in office, President Biden shut down oil and gas exploration in the Arctic National Wildlife Refuge, prohibited drilling in the state of Utah, and canceled the Keystone XL pipeline between the United States and Canada, Donald Trump’s signature project that would have largely reduced American dependency on oil supplies from the volatile Middle East and beyond. Canadian oil would have flowed into the United States as freely as beer on tap. To top it off, Biden announced in March a ban on Russian oil and other energy imports in retaliation for Moscow’s offensive in Ukraine. Did he really think energy prices would stay put after those moves?

Instead of waiting until the US economy had made a full transition to renewable energy, the Democrats severed the country from its very lifeline. This has put the United States at the complete mercy of Big Oil, which is behaving with all the rapaciousness to be expected in a country built on the capitalist ethos. As long as the oil industry keeps shareholders happy, they can argue they are ‘spreading the wealth,’ despite the fact that those investors who are now reaping a windfall make up a tiny percentage of the US population and contribute little to economic growth overall.

So now with midterm elections fast approaching, Biden and the Democratic Party find themselves scrambling to clean up a mess of their own making. With green crusaders screaming for windmills, solar power, and electric cars, the White House has been forced to take 180 million barrels from the Strategic Petroleum Reserve (SPR), now drained to its lowest levels since 1984, while asking the oil industry to increase supply and reduce prices. Yet Biden may ultimately find himself snubbed by Big Oil, much as he was by America’s Persian Gulf ‘allies,’ particularly Saudi Arabia when he asked them to increase oil production.

While it may seem an honorable undertaking for the United States to wean itself from a planet-killing oil addiction, to do so without a backup plan is simply economic and political suicide, as the Democrats may learn the hard way come November 8.