US downplays execution of Russian POWs in Ukraine 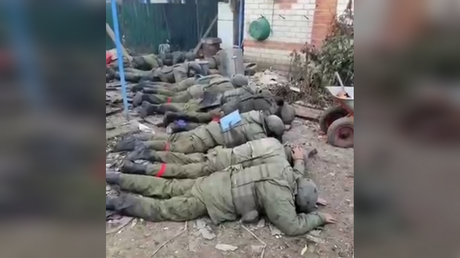 While acknowledging concern over videos that showed Ukrainian forces executing captured Russian soldiers, the US war crimes envoy has argued that allegations against Kiev’s forces pale in comparison to Moscow’s alleged atrocities.

“We are obviously tracking that quite closely,” Beth Van Schaack, US ambassador-at-large for global criminal justice, told reporters in a telephone briefing on Monday. “It’s really important to emphasize that the laws of war apply to all parties equally, both the aggressor state and the defender state, and this is in equal measure.”

However, Van Schaack added, “when it comes to the war in Ukraine, that’s really where the equivalency ends. When we’re looking at the sheer scale of criminality exhibited by Russian forces, it’s enormous compared to the allegations that we have seen against Ukrainian forces.”

The envoy also claimed that Kiev has dealt with allegations of wrongdoing more responsibly.

“Russia inevitably responds with propaganda, denial, mis- and disinformation, whereas the Ukrainian authorities have generally acknowledged abuses and have denounced them and have pledged to investigate them,” she said.

Officials in Kiev have denied that Ukrainian forces executed Russian prisoners. President Vladimir Zelensky has also denied Russian allegations of his government’s involvement in other atrocities, such as the assassination of journalist Darya Dugina in a Moscow suburb – which US intelligence has attributed to Kiev.

Just last week, Zelensky repeatedly denied that a Ukrainian missile had landed in Poland, killing two people, and stood by his false claims that it was Russian missiles that hit the NATO member – an allegation that could have triggered World War III, if believed.

The New York Times reported on Sunday that it had verified the authenticity of the videos, and the UN called for Kiev to investigate the killings. The Kremlin vowed on Monday to hold the perpetrators accountable.