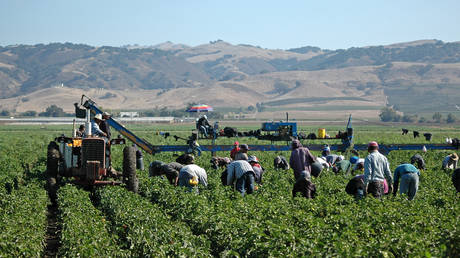 Farmers in the US state of Florida need migrants to “pick the crops” due to a labor shortage in America, House Speaker Nancy Pelosi claimed on Friday.

Speaking at a press conference, the California Democrat was asked to comment on security at the US’ southern border with Mexico.

Pelosi admitted that the Biden administration has “a responsibility to secure our border,” adding that “we also have a responsibility to recognize the importance of newcomers to our nation.” She believes this could be remedied by “comprehensive immigration reform.”

She went on to point out that the US is experiencing a workforce shortage. “You see even in Florida some of the farmers and the growers saying, ‘Why are you shipping these immigrants up north?  We need them to pick the crops down here,” Pelosi noted.

While the House speaker did not elaborate on what exactly she meant by these remarks, it was an apparent reference to when Florida Republican governor Ron DeSantis sent two planeloads of migrants to the upscale island of Martha’s Vineyard in Massachusetts, where the Obama family and other political heavyweights have homes.

Pelosi’s comments sparked a backlash from a number of conservatives. “It’s clear Pelosi and Democrats are exploiting illegal aliens and only view them as cheap labor,” Rep. Andy Biggs (R-AZ) tweeted, adding that “this is what real racism looks like.”

This statement was echoed by the Federation for American Immigration Reform, a US anti-immigration organization, which commented: “For Democrats, mass immigration checks two boxes: 1. More future voters 2. Cheap foreign labor.”

The issue of illegal immigration has been particularly thorny for many Americans in recent years. According to an August NPR/Ipsos poll, more than half of US citizens believe that their country is facing an “invasion” at the southern border. As of late September, the US authorities had made more than 2 million immigration arrests along the southern border during the past 11 months, according to official figures.