US issues denials after Ukraine strikes inside Russia 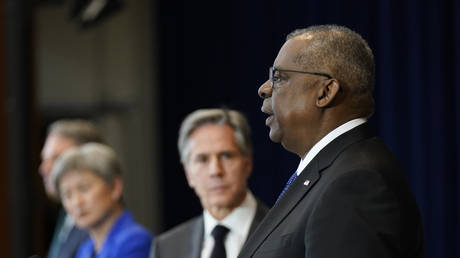 Secretary of State Antony Blinken denied the US had anything to do with the Ukrainian drone strike on two airfields deep inside Russia but vowed to continue supplying Kiev with anything it needs. Defense Secretary Lloyd Austin, meanwhile, sidestepped media reports about the US hobbling HIMARS launchers by saying the Pentagon won’t “prevent” Ukraine from developing long-range capabilities.

Austin and Blinken took questions from the press on Tuesday alongside their Australian counterparts who are visiting Washington, when Monday’s attack on two Russian airfields and the Wall Street Journal report about modifications to HIMARS rocket launchers came up.

According to the Russian Defense Ministry, two strategic bomber bases in Ryazan and Saratov regions came under attack by drones on Monday morning. Debris from drones shot down by air defenses killed three servicemen and resulted in minor damage to two bombers, Moscow said, but did not disrupt a planned strike on Ukrainian military logistics later in the day. The drones used were reportedly modified Soviet designs, rather than anything the West has delivered to Kiev this year.

Asked about the report that the US had modified HIMARS launchers sent to Ukraine to be incompatible with longer-range missiles, Austin denied the US was trying to hobble Kiev.

“We are not working to prevent Ukraine from developing their own capability,” Austin told reporters. “We’re absolutely not doing that.”

Earlier, Blinken’s spokesman Ned Price declined to comment on either the drone attacks or the HIMARS modifications, saying only that the US was providing Ukraine “with what it needs to use on its sovereign territory – on Ukrainian soil – to take on Russian aggressors.”

Back in June, when the US first sent HIMARS to Ukraine, Blinken told reporters he had received “assurances” from Kiev that they wouldn’t be used “against targets on Russian territory,” which he believed due to “a strong trust bond.” The US ambassador to Kiev, Bridget Brink, however, said at the time that the decision on the range of missile attacks would be “up to the Ukrainian side.”

According to anonymous US officials that spoke to the Wall Street Journal, however, all 20 HIMARS units sent to Ukraine had undergone hardware and software modifications that meant they could not use longer-range ATACMS missiles, even if Kiev managed to obtain them elsewhere, or somehow produce their own.

Moscow has repeatedly warned Washington that providing heavy weapons to Ukraine risks crossing Russia’s “red lines” and involving the US and NATO in the conflict directly. The US and its allies insist they are not a party to the hostilities, but continue arming Kiev.