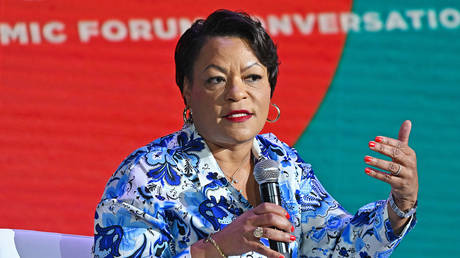 The Democratic Mayor of New Orleans, LaToya Cantrell, has insisted that spending tens of thousands of dollars on first-class plane seats was necessary, suggesting that flying economy would be unsafe for a black woman.

Cantrell is refusing to refund the $30,000 of taxpayers’ money she spent on the luxury seats to France and Switzerland.

Speaking at a press conference last week, Cantrell insisted that her “travel accommodations are a matter of safety, not luxury.” That’s despite her entourage and security staff reportedly traveling coach during the trips.

“As the mother of a young child whom I live for, I am going to protect myself by any reasonable means in order to ensure I am there to see her grow into the strong woman I am raising her to be,” Cantrell explained, adding that “anyone who wants to question how I protect myself just doesn’t understand the world black women walk in.”

The mayor took a luxury American Airlines flight to Switzerland back in July and a first-class trip to France earlier this year, insisting that she was “doing business on behalf of the city.”

However, New Orleans’ travel policy for city officials makes it clear that all employees “are required to purchase the lowest airfare available” and that those who choose to upgrade their seats are responsible for the difference in cost.

Furthermore, if the city ends up overpaying for any travel expenses, the employees are required to reimburse the city within 20 business days.

Speaking to Fox 8, the mayor’s staff said they are checking to see if the city policy applies to Cantrell, as she is an elected official and not specifically hired by the city itself.

As reported by 4WWL, Cantrell also spent over $2,800 dollars back in March on a first-class trip to Miami for a US Conference of Mayors, while her entourage spent between $300 and $677. In January she also reportedly spent $2,300 on a luxury flight to a Conference of Mayors meeting in Washington while her staff paid just $250.