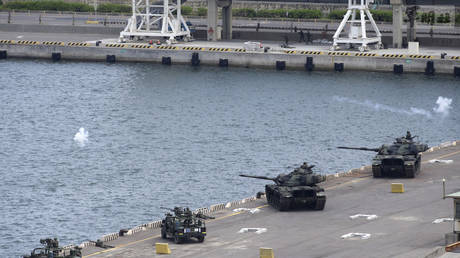 Taipei is simultaneously lobbying the EU to pile on pressure on Beijing, according to Reuters

The US government is considering whether to impose additional sanctions on China in order to prevent an invasion of Taiwan, Reuters reported, noting that Taipei is waging lobbying efforts in both the United States and Europe amid rising tensions between Beijing and the island.

The White House is “considering options for a sanctions package” on China due to fears among both Taiwanese and Western officials that Beijing is preparing to launch an “invasion” to reunify with the island by force, according to unnamed sources cited by Reuters.

Though the sources provided few details on the measures under consideration, they said Taiwan is pressing American and European officials to impose penalties, though both lobbying efforts are reportedly “at an early stage.”

Tensions between Washington and Beijing have spiked in recent months, largely triggered by a visit to Taiwan by US House speaker Nancy Pelosi in August, followed by similar trips by lower-level officials. China responded with major military drills in the air and waters surrounding the island, including an exercise to organize a full-on “blockade.”

While the White House is reportedly mulling new measures against China to “deter” an attack on Taiwan, US President Joe Biden has previously questioned whether economic penalties are effective toward that end, declaring in March that “sanctions never deter.”

Washington had prepared multiple rounds of sanctions seeking to “deter” Russia’s attack on Ukraine, but after Moscow nonetheless sent troops into the neighboring country said the unprecedented sanctions campaign was always designed to “cripple” Russia’s economy. The US also maintains harsh restrictive measures against Iran, Cuba, North Korea and other states to “deter” what it frequently deems “malign” behaviors.

The United States has imposed economic penalties on China in the past, with the Donald Trump administration prohibiting transactions with some Chinese companies – in some cases forcing US firms to divest from them – while pursuing a low-level trade war with Beijing.

Beijing considers Taiwan part of its own territory, and though it has denied allegations of an imminent attack, has claimed the right to reclaim the island by force if necessary. Few countries formally recognize Taiwan as an independent country; the United States is not among them, despite arranging ‘informal’ visits by officials and approving several rounds of weapons sales to the island over the years.