US mulls ‘neutering’ of drones for Ukraine – CNN 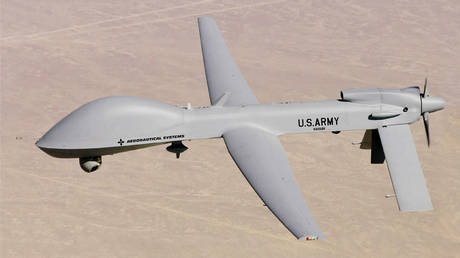 The US is looking into a possible modification of its state-of-the-art drones so that they could be sent to Ukraine, CNN reported on Monday, citing sources. Earlier, US media reported that Washington had refused to provide Kiev with this type of unmanned ariel vehicle (UAV) over technological security concerns as well as fears that the move could escalate the conflict.

According to two officials interviewed by the outlet, Washington is exploring whether it could refurbish Gray Eagle MQ-1C UAVs to lower the odds that any sensitive technology gets into the ‘wrong hands.’ Should these concerns be addressed, the chances of Ukraine eventually receiving these drones will become significantly higher, the report says.

While one congressional official told CNN that these “specific and very technical tweaks and neutering” are feasible, “those things take time and are fairly complex.”

Another US official noted that “there’s still real interest in providing [Ukraine with] this particular system” if the Pentagon manages to make necessary modifications and the drones will still be useful on the battlefield.

Last week, The Wall Street Journal reported that the US refused to supply Kiev with Gray Eagle drones. The primary concern was said to be that they could add fuel to the Ukraine conflict.

However, a CNN source claimed that the fears revolve more about technological security than possible escalation as any downed drones could be recovered and examined by the Russian military.

“These are very expensive systems and there are concerns that they could be shot down,” a US official told the outlet, without providing any details on which parts may contain the most sensitive secrets.

Gray Eagles can fly at an altitude of up to 7,600m for more than 27 hours and carry up to four Hellfire missiles.

After Russia launched its military operation against Ukraine in late February, the US has provided Kiev with billions of dollars in security assistance. However, Washington has so far resisted calls to provide advanced weaponry such as Patriot air defense systems and F-16 fighter jets. Moscow has repeatedly warned that weapons shipments will only prolong the conflict.