US Navy teaches its personnel about gender pronouns 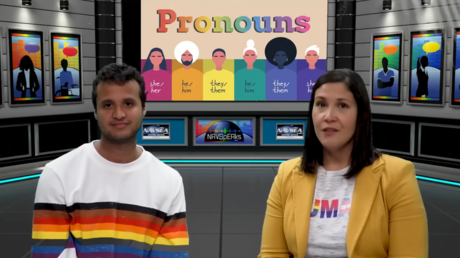 A training video posted by the US Navy suggests that its members are being taught how to correctly use gender pronouns and “inclusive language” to create “safe spaces” for LGBT staff.

The instructional video in the style of a children’s show, denoted as an “Official US Navy Video”, was uploaded to the Defense Visual Information Distribution Service by Air Force staff sergeant John Vannucci late last month, but has only now begun spreading online.

Presented by Naval Undersea Warfare Center engineers Jony Rozon and Conchy Vasquez, the nearly four-minute video explains how to use “inclusive language” to create “a safe space for everybody.”

The pair, draped in LGBT rainbow apparel, suggest using phrases such as “hey everyone” or “hey team” instead of “hey guys” and including pronouns in their emails to get Navy service members to show each other “that they are allies.”

Navy staff must also “take steps to ensure they do not misgender someone” according to the video, but should also be mindful not to pressure individuals to disclose their gender pronouns, arguing that some colleagues may still be in “the process of discovery” and not yet ready to provide this information.

“A pronoun is how we identify ourselves apart from our name, and it’s also how people refer to us in conversations,” explains Vasquez to Rozon, who notes that “using the right pronouns is a really simple way to affirm someone’s identity” and is a “signal of acceptance and respect.”

The video goes on to provide tips for Navy service members who fear they may have “misgendered someone,” with Vasquez stating that “the first thing to recognize is that it’s not the end of the world. You correct yourself and move on, or you accept the correction and move on.”

“The most important thing I can tell you is do not put the burden of making you feel good about your mistake on the person that you just misgendered,” she warned.

The pair suggested that service members should practice memorizing a person’s gender pronouns by thinking about three positive things about a person using their pronouns.

“Let’s say the person chooses to use ‘they’. Then you will in your mind go: ‘They have a nice shirt. They have a nice smile. They are really smart.’ So that kinda sticks in your brain,” said the female Navy engineer.

Vasquez also shared a harrowing story about how she was recently confronted by a person who disagreed with the use of gendered pronouns. “I was really taken aback by the comment,” she said, “the only thing I could really think quickly to say was ‘it’s not about you at all, it’s ultimately about respect.”

Rozon concurred, adding that “misgendering” someone was the same as mispronouncing their name. The pair ended the video by saying that while there are certainly names that are difficult to pronounce, what wasn’t difficult was saying “he/she/they.”

Meanwhile, the US army has been revealed to be teaching cadets at West Point Academy the principles of Critical Race Theory (CRT), and teaching the mostly-white recruits how to address “whiteness,” according to documents released by government watchdog group Judicial Watch.