US praised for Nord Stream explosion 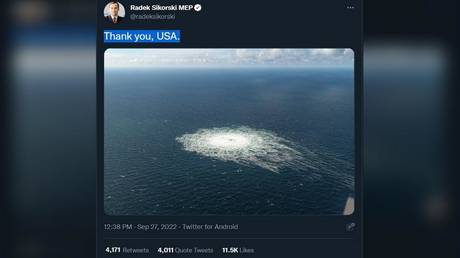 While the US, Russia and most European governments reserved judgment as to who might be behind Monday’s explosion that damaged both Nord Stream pipelines and cut off Germany from Russian gas, former Polish minister and member of the European Parliament Radoslaw Sikorski had no such qualms.

“Thank you USA,” Sikorski tweeted on Tuesday, alongside a photo of the massive gas leak in the waters of the Baltic Sea. Both pipelines were severely damaged off the coast of the Danish island of Bornholm, in what everyone is now calling a deliberate act.

Sikorski later tweeted, in Polish, that damage to Nord Stream means that Russia will have to “talk to the countries controlling the Brotherhood and Yamal gas pipelines, Ukraine and Poland” if it wishes to continue delivering gas to Europe. “Good work,” he concluded.

Nord Stream 1 and Nord Stream 2 lost all pressure on Monday, after what the Swedish and Danish authorities later said were a series of undersea explosions. The first pipeline was operating at reduced capacity after what Russia said were technical difficulties, while the second was fully pressurized but not operational, due to German refusal to certify it.

Russian Foreign Ministry spokeswoman Maria Zakharova wondered if Sikorsky’s tweet amounted to an “official statement that this was a terrorist attack.” Meanwhile, Moscow’s deputy ambassador to the UN, Dmitry Polyanskiy, thanked Sikorski for “making it crystal clear who stands behind this terrorist-style targeting of civilian infrastructure!”

Polish Prime Minister Mateusz Morawiecki didn’t go quite as far as Sikorski, but chose to describe the Nord Stream incident as “an act of sabotage, related to the next step of escalation of the situation in Ukraine.”

Not just any MEP, Sikorski is a former UK citizen and a fellow at numerous US and NATO think-tanks, as well as Poland’s former defense (2005-2007) and foreign minister (2007-2014). In October 2014, he was caught fabricating a claim about Russian President Vladimir Putin wanting to partition Ukraine with Warsaw, and was forced to recant.

Sikorski called Russia a “serial rapist” in January 2022 and in June told Ukraine’s Espreso TV that NATO had the right to give Kiev nuclear weapons. He is married to American pundit Anne Applebaum, who is also an outspoken foe of Russia.

While Sikorski thanked the US for the Nord Stream sabotage, Kiev blamed Russia. President Vladimir Zelensky’s adviser Mikhail Podoliak called it a “a terrorist attack planned by Russia and an act of aggression towards EU,” arguing the best response would be sending German tanks to the Ukrainian army.