US rents soar to another all-time high 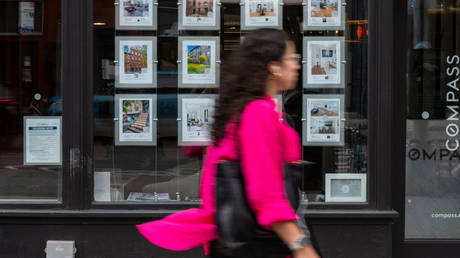 America’s median rental rate set a new record for the 17th straight month, climbing more than 12% from a year earlier

Americans continue to be battered by uninterrupted increases in their cost of living, with the latest indicator showing that rates for rental housing have set new record highs for 17 straight months.

The median monthly rent in the 50 largest metropolitan areas jumped to $1,879 in July, up 12.3% from a year earlier, Realtor.com reported on Wednesday. The data is based on Realtor.com listings for studios, one-bedroom, and two-bedroom dwellings, meaning larger apartments and houses are excluded from the median.

Although rents are still rising at a double-digit pace, the rate of increase has cooled from the peak surge of 17.3% in January. The latest gain follows an increase of 14.1% from a year earlier in June.

“Landlords have eased up on the size of rent increases, but many renters are still feeling the pinch on their monthly budgets,” Realtor.com chief economist Danielle Hale said. “Even as they juggled higher costs for food and groceries and transportation, rising rent and housing expenses is the biggest source of financial strain.”

The benchmark US inflation rate climbed 8.5% in July after jumping to a 40-year high of 9.1% in June. And with the nation’s central bank pushing interest rates higher to cool inflation, US mortgage rates have climbed to the highest level since November 2008, making it tougher for renters to buy homes.

New home sales tumbled 29.6% on year in July, the US Census Bureau reported on Tuesday. However, even with demand slowing, the average price of a newly built home rose to $546,800, up 23% from a year earlier.

“Many renters are simply tapped out,” Hale said. “Between soaring inflation, higher gas prices and the stock and cryptocurrency markets taking a beating, they have less cash on hand to spend more on housing.”

The biggest July rent increases were in Miami, at 26.2%, and the New York area, at 25.4%. Realtor.com said there have been bidding wars for apartments and long lines for open houses in New York City, where rents rose 38.3% in July, roughly tripling the rate of increase in the surrounding suburbs. Boston, Chicago, and Orlando, Florida also had year-on-year increases exceeding 20%.