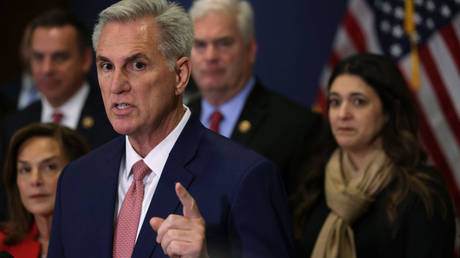 Kevin McCarthy has vowed that if elected House speaker, he will form a select committee targeting Beijing

The top Republican in the US Congress has pledged to form a special committee to investigate intellectual property theft and other alleged abuses by China if his colleagues elect him speaker when the party takes control of the House of Representatives in January.

“China is the No. 1 country when it comes to intellectual property theft,” Rep. Kevin McCarthy said Sunday in a Fox News interview. “We will put a stop to this and no longer allow the administration to sit back and let China do what they are doing to America.”

The California Republican accused President Joe Biden’s administration of failing to stand up to Beijing. He has previously suggested that the Chinese Communist Party (CCP) wields undue influence over Biden, among other Democrats, and has called for an investigation of allegations that the president’s family received millions of dollars from China.

Republicans secured a slim House majority in this month’s midterm congressional elections, allowing the party to set the legislative agenda and wield subpoena power to investigate such issues as the origins of Covid-19, last year’s chaotic withdrawal from Afghanistan, the illegal immigration crisis and alleged influence-peddling by the Biden family.

McCarthy is the frontrunner to assume the speaker’s gavel, having reportedly fended off far-right challenger Andy Biggs in a closed-door leadership vote last week. However, his position won’t be confirmed unless and until he wins a majority vote of the full House when the new Congress convenes on January 3.

A select committee on China could pursue a wide range of issues. For instance, a Republican task force that McCarthy formed in 2020 made hundreds of recommendations related to national security, supply chains, trade, technology and energy supplies. Rep. Michael McCaul, a Texas Republican who headed the task force, called the CCP “the greatest generational challenge we face today.”

McCarthy also vowed to oust several high-profile Democrats from their key committee assignments. Those will include removing Representatives Adam Schiff and Eric Swalwell, both of California, from the House Intelligence Committee and expelling Minnesota’s Ilhan Omar from the Foreign Affairs Committee. Swalwell allegedly had an affair with a suspected Chinese spy who targeted US politicians.

READ MORE: US moves to counter Beijing’s territorial claims
Previous Posts ‘Hell on earth’ may break out in Kosovo – Serbian president
Next Posts Arms sent to Ukraine could end up with ‘terrorists’ – UK