US sends more weapons to Ukraine 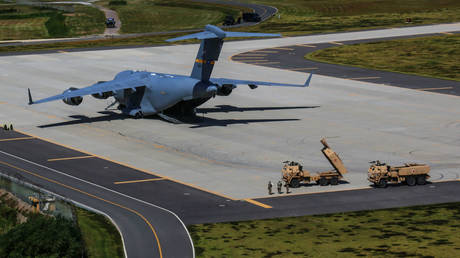 The newest package includes $270 million worth of drones, ammunition and HIMARS rocket artillery

The White House on Friday announced another $270 million worth of US “security assistance” to Ukraine. The newest batch of supplies will include four HIMARS rocket artillery launchers, a large quantity of ammunition, as well as hundreds of ‘Phoenix Ghost’ suicide drones, AP reported citing National Security Council spokesman John Kirby.

In addition to four more High Mobility Artillery Rocket Systems (HIMARS) and an unspecified number of GLMRS rockets for them, the aid package includes up to 580 drones and 36,000 rounds of artillery ammunition for the M777 towed howitzers already supplied to Kiev by the Pentagon.

President Joe Biden “has been clear that we’re going to continue to support the government of Ukraine and its people for as long as it takes,” Kirby told AP. Biden is currently being treated for Covid-19 and isolating at the White House.

With this latest batch of weapons and equipment, the Biden administration will have spent a total of $8.2 billion on arming Ukraine. The funds are drawn from the $40 billion package approved by Congress in May.

The US has previously sent Ukraine about 120 of the drones, which had been “rapidly developed by the Air Force in response specifically to Ukrainian requirements,” the Pentagon said back in April. The decision to send more follows claims by Biden’s national security adviser, Jake Sullivan, that Iran was preparing to sell “several hundred” attack drones to Russia. Despite rampant speculation in the media, no evidence of such a deal has since materialized.

According to Kirby, the Ukrainian troops have used the dozen previously supplied HIMARS launchers and Phoenix Ghost drones to hold off “larger and more heavily equipped” Russian troops.

Four HIMARS launchers and one ammunition transport vehicle were destroyed by precision missile strikes between July 5-20, the Russian Ministry of Defense said on Friday.

Earlier this week, three suicide drones targeted the Zaporozhye Nuclear Power Plant in Energodar, damaging the complex. It was not clear whether they were Phoenix Ghosts or some other model in the Ukrainian arsenal, such as the US-made Switchblades. Europe’s largest atomic power plant is in territory controlled by Russian forces.

US military and intelligence officials continue to insist that Russia is not making much progress in Donbass and taking heavy casualties due to the weapons supplied to Ukraine by the West. However, both US and UK military think-tanks have recently voiced concerns over the sheer diversity of weapons systems sent to Ukraine by the variety of NATO allies.

Washington maintains that the US is not a party to the conflict because no US troops have set foot in Ukraine, but it has openly provided Kiev with weapons, ammunition, intelligence and even satellite targeting data.