US states vote on abortion rights 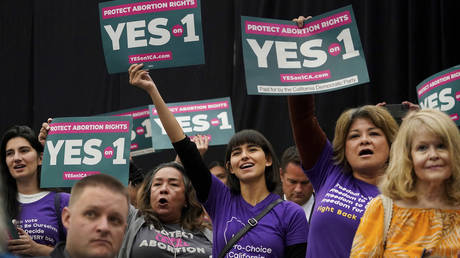 Vermont, Michigan and California all voted to guarantee the right to terminate pregnancy

Three US states – Vermont, Michigan, and California – have voted to enshrine the right to abortion in their state constitutions. While the results demonstrate broad support for abortion in blue states, legal wrangling over the wording of the laws may impose some limits.

Vermont became the first state to codify abortion rights into its constitution on Tuesday, with voters backing a “Constitutional Right to Reproductive Autonomy” by 77% to 22%, according to the Associated Press. While the right to terminate pregnancy is already protected in Vermont under a 2019 state law, the successful referendum adds another legal protection after the Supreme Court overturned the landmark Roe v. Wade decision this summer.

Roe v. Wade had guaranteed the right to abortion under the Constitution’s right to privacy, and remained the de-facto law of the land on the issue from 1973 until the Supreme Court struck it down in June. The majority-conservative court found that the 1973 ruling rested on an “egregiously wrong” and “exceptionally weak” reading of the Constitution.

Michigan followed Vermont’s lead, with voters choosing by 55% to 45% to codify the “right to reproductive freedom” in the state constitution. Unlike Vermont, Michigan had a 1931 law banning abortion on its books, which could have taken effect following the Roe ruling.

In California, voters chose by 65% to 35% to add a line declaring that “the state shall not deny or interfere with an individual’s reproductive freedom” into the state constitution. Californian law previously allowed abortions before the point of fetal viability, a point that is generally considered to be between 22 and 24 weeks of pregnancy.

The language used in the three amendments passed on Tuesday is open to interpretation. In Vermont, conservatives could insist that restricting abortions after a certain point during a pregnancy is “a compelling state interest.” Michigan’s amendment allows the state to “prohibit abortion after fetal viability,” which its Republican-held legislature may do.

California’s amendment contains no language on viability and no explicit restrictions on when abortions may be performed. This ambiguity clashes with the state’s existing ban on terminations before the point of viability, which will likely lead to challenges in court.