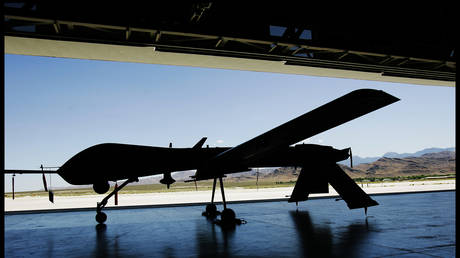 The US Africa Command has claimed a Tuesday airstrike in Somalia, declaring the drone attack had targeted “al-Shabaab terrorists,” accusing them of “attacking partner forces in a remote location near Duduble,” around 64 kilometers (40 miles) northwest of the capital, Mogadishu.

Further details were not given in the statement, which added that AFRICOM “take[s] great measures to prevent civilian casualties,” unlike the “indiscriminate attacks that al-Shabaab regularly conducts against the civilian population.” The militant group and others like it, the statement released on Wednesday reiterated, “present long-term threats to the US and regional interests.”

While Ahmed praised the deal as a “victory for the Somali people,” even thanking the president for his apparently implied support, both the president and prime minister quickly hit back, declaring the signing of such deals during an election period to be illegal and – PM Roble added, threatening legal action – unacceptable.

While AFRICOM’s statement regarding the airstrike claims “no civilians were injured or killed as a result of this airstrike,” the fifth such bombing officially conducted under the authority of current US President Joe Biden, such preliminary casualty statements are frequently revised upon later analysis. This occurred most recently during the last days of the US military’s departure from Afghanistan, when the alleged killing of an “ISIS-K facilitator” by airstrike in Kabul on August 29 – two days before the Americans had promised to leave the country – unraveled into the murder of 10 civilians, including seven children. The alleged “facilitator” turned out to be an innocent employee of an American aid organization.

While the Pentagon called the airstrike an “honest mistake,” US media reported that none of the people involved in the strike would be punished.

Somalia has been under US bombardment for 15 years under the 2001 Authorization of Use for Military Force doctrine, a controversial resolution passed in the wake of the September 11 terrorist attacks that justifies interference wherever there can be said to be terrorist groups that could potentially have “planned, authorized, committed, or aided” the attacks. However, the full list of groups the US is currently fighting (or authorized to fight) is classified.

The Somali airstrike was met with little international attention until later in the week, when a handful of anti-war figures sought to point out the silence in the wake of the strike.

Coastline Exploration’s website still features a page on ‘hydrocarbon exploration in Somalia’, noting that the area contains formations “which could potentially hold significant amounts of hydrocarbons.”

AFRICOM head Gen. Stephen J. Townsend referred to al-Shabaab as “Al Qaeda’s largest, wealthiest and most deadly affiliate” following the drone strike. The rise of the militant group, which has claimed responsibility for at least 21 civilian deaths this month according to local media, has been aided by political chaos in Somalia, compounded by 15 years of airstrikes.