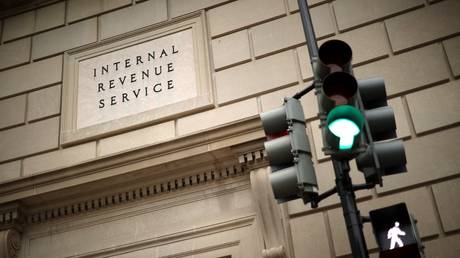 Some 49% of American voters believe that the 87,000 new Internal Revenue Service agents to be hired by the administration of Joe Biden will target either the middle class or the president’s political opponents, a poll has found. Democrats are more likely to believe that the agents will focus on the wealthy, as Biden has claimed.

Released on Tuesday, the Trafalgar Group poll found that 33% of voters said the agents would be hired to “audit middle class Americans and small businesses,” 31% said that “wealthy Americans and large corporations” would be targeted, while 16% said that the true purpose of hiring so many new agents is to “target the political opponents of those in power.”

Among Democrats, 49% viewed wealthy Americans and corporations as the targets of the new hires, while 15% named the middle class. The numbers are almost reversed for Republicans, with more than 50% saying that middle-class Americans and small business owners will be targeted, and 16% saying that the wealthy will be audited instead.

Just 11% of Democrats told Trafalgar that they see the agents being weaponized against political opponents, compared to 19% of Republicans.

The IRS’ hiring spree will be funded by the Inflation Reduction Act, which was signed into law by Biden earlier this month. Despite its name, the act is a $739 billion spending package that the Congressional Budget Office noted will saddle middle-class Americans with around $20 billion in additional taxes over the coming decade, while having a “negligible” impact on inflation this year.

Biden maintains that heightened tax enforcement will offset his administration’s aggressive spending and reduce the federal budget deficit. Republicans argue that with the agency’s budget increasing by $80 billion, the IRS will put the squeeze on ordinary Americans.

Not all of the 87,000 new hires will be auditors, and most will fill vacant or soon-to-be vacant positions, Time magazine reported earlier this month. In total, the agency’s workforce will grow by between 20,000 and 30,000, the magazine added.

The IRS is not the only federal agency that Biden has been accused of weaponizing against his political opponents. In the aftermath of an FBI raid on former President Donald Trump’s Florida estate, as well as allegations that FBI agents buried information damaging to the Biden campaign in 2020, a Rasmussen poll taken earlier this month found that 53% of Americans now view the agency as “Joe Biden’s personal Gestapo.”

Along with 76% of Republicans, even 37% of Democrats agreed with the “Gestapo” label.