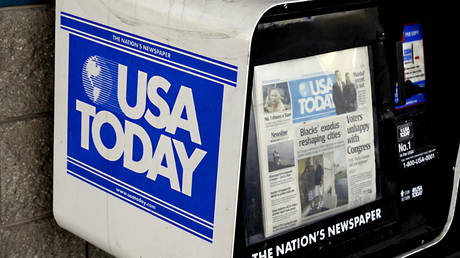 USA Today released a statement on Thursday announcing the removal of 23 articles from its website and other platforms, after an internal investigation found that the author behind the stories “fabricated” quotes and sources.

“The audit revealed that some individuals quoted were not affiliated with the organizations claimed and appeared to be fabricated. The existence of other individuals quoted could not be independently verified. In addition, some stories included quotes that should have been credited to others.”

“As a result, USA Today removed 23 articles from its website and other platforms for not meeting our editorial standards,” the note concluded, going on to list all the articles written by the journalist.

Miranda, who worked as a breaking news reporter for the outlet, resigned from USA Today and the USA Today Network several weeks ago, and the text of all her articles has been replaced with the quote: “Editor’s note: This story has been removed from our platforms because it does not meet our standards.”

The deleted articles included coverage of an abortion ban in Texas and the conflict in Ukraine, along with a guide to sunscreen and a top 10 list of liquors for Christmas.

Since some of Miranda’s stories also appeared in the print version of USA Today. A spokesperson for the newspaper has said the editor’s note on the false reporting will appear in print on Friday.

The news organization also said it strives to be “accurate and factual” and that staff “regret this situation.” The outlet has pledged to improve its process for lodging complaints or correction requests, and ensure that stories have clear identifying information for quoted individuals so that such situations do not occur in the future.

As reported by the New York Times, USA Today also held a video conference with its employees on Thursday to discuss the investigation into Miranda’s work. The outlet reportedly concluded that the journalist took deliberate steps to deceive investigators by producing false evidence of her news gathering, including recordings of interviews.

Previous Posts Israel secretly coordinates Syria airstrikes with US – WSJ
Next Posts J.K. Rowling consents to use of ‘killing curse’ on Ukrainian missiles