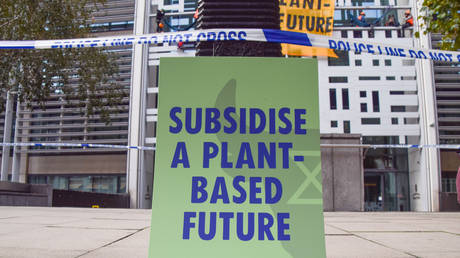 The Mango Tree in Somerset, England will reopen with meat on the menu in a bid to attract customers

The Mango Tree, a vegan eatery in Taunton, Somerset, has announced it will be reinventing itself with a meat-inclusive menu following brief renovations, citing the prohibitively high cost of doing business “as a purely vegan restaurant” in a notice posted after it closed its doors on Saturday.

After “an exciting period of change,” customers will be able to return for “a variety of dishes to accommodate a wide variety of dietary needs and preferences,” the restaurant revealed, explaining that “continuing as a purely vegan restaurant has not been sustainable for a considerable amount of time as not enough customers supported us.”

The restaurant strove to put a positive spin on the news, reassuring vegan clients they would still have access to the same “delicious plant based dishes that would otherwise have disappeared” and even tried to head off potential ethical criticisms by pointing out that “ethics extend to the jobs and welfare of our wonderful team, to whom we owe a great deal, and another chance.”

But the compromise was too much for some vegan patrons, who took to social media to denounce the move. “Worse than shutting, selling meat!” one commenter tweeted, while another mused that the owners couldn’t possibly be vegan or they would have chosen to go under rather than stoop to exploiting animals.

“Veganism isn’t a business venture. It’s an ethical philosophy that does the best for the animals, the planet, and public health,” one patron declared, while another got in a dig at the Mango Tree’s “high prices” by claiming that its “authenticity and plant-based values” had justified the outlay – until now.

Others found less lofty reasons why the meaty new Mango Tree would fail. “I think they’ll find meat is more expensive now,” one user snarked. Non-vegan establishments have also suffered in the self-inflicted energy crisis besieging Europe, with 70% of UK pubs reporting they expect to go out of business by the winter without government intervention.

The Mango Tree did not back down from its decision to go omnivore, insisting it had tried every form of outreach to its vegan clientele imaginable, from “lots of marketing, many special offers, offering dine in and takeaway, introducing the use of home delivery partners, and working incredibly hard to be as efficient as possible,” only for “not enough of the local population [to use] us regularly enough to make continuing in the current format sustainable.”