Venezuela and US announce prisoner swap 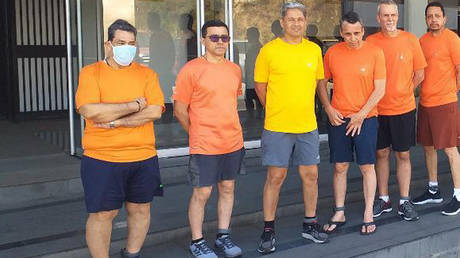 Venezuela has released seven Americans, including five oil executives, US President Joe Biden said on Saturday. In return, according to the Venezuelan government, Washington freed two relatives of President Nicolas Maduro who were “unjustly detained” by the US.

Five of these individuals were executives of Citgo Petroleum Corporation, jailed in 2017 on corruption charges. Another company executive, Gustavo Cardenas, had already been released by the Venezuelan authorities in March.

Two other people who were freed are former US Marine Matthew Heath, who was arrested on terrorist charges, and a Florida man, Osman Khan, who was detained for allegedly entering the country illegally from Colombia.

In exchange, according to a US official, Biden granted a pardon to Franqui Francisco Flores de Freitas and Efrain Antonio Campo Flores, both nephews of Maduro’s wife. In 2017, they were sentenced to 18 years in prison for conspiring to import cocaine into the US.

Maduro’s government stated that Caracas, building on the results of talks in March with the US, managed to free two of its citizens who were “unjustly” held in the US, while the Americans were released for “humanitarian reasons.”

The swap is said to have taken place at an airport in an unspecified third country, with one US official describing the decision to release the Venezuelans as particularly difficult. “The president made a tough decision, a painful decision, and offered something that the Venezuelans have actively sought,” the official told CNN, adding that the “only acceptable outcome” for Biden was to free the Americans.

The exchange comes as the Biden administration apparently seeks to mend ties with the South American nation. In early June, the US allowed a number of companies to start shipping Venezuelan oil to Europe. According to Reuters, at the time, the US hoped that the oil from the sanctioned country would help the EU become less dependent on Russia.

Several months prior, a group of high-ranking US officials traveled to the oil-rich South American nation to meet with Maduro’s government.

Although the agenda of the talks was unclear, the New York Times reported at the time that the Biden administration sought to “separate Russia from its remaining international allies” amid the Ukraine conflict.