War of words in Italy over Ukraine aid 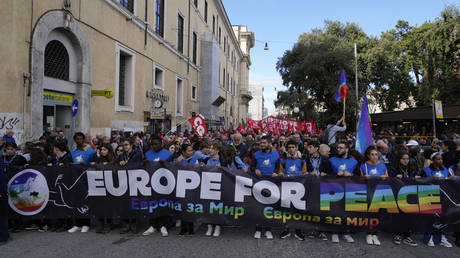 Italy’s government and opposition have traded barbs over the weapons shipments for Kiev, after a massive demonstration in Rome over the weekend called for peace and diplomacy in Ukraine instead. After Defense Minister Guido Crosetto called him a “neighborhood bully,” former PM Giuseppe Conte said that shirking from political debate on Ukraine aid would be bullying democracy itself.

Conte, who leads the Five Stars Movement (M5S), addressed tens of thousands of Italians who rallied against the war on Saturday, telling them the new government’s approach is “leading only to escalation.” Now that Ukraine is “fully armed,” Italy needs to push for a ceasefire and peace talks, he said.

Crosetto is one of the founders of the ruling Brothers of Italy (FdI), and holds the defense portfolio in Prime Minister Giorgia Meloni’s new government. He attacked Conte on the pages of the newspaper Corriere della Sera on Sunday, calling his remarks at the demonstration the “meddling like a neighborhood bully” who did not respect the institutions of state.

Conte must have developed this “authoritarian approach to institutions” during the pandemic lockdowns, Crosetto insinuated, telling the opposition politician that his ministry will “follow the law, as always,” in implementing the decisions of the previous government to send five batches of weapons to Kiev. Conte supported those decisions, Crosetto continued, but has now changed his mind in order to “exploit” the anti-war protest.

Firing back in a Facebook post on Sunday evening, Conte called Crosetto’s words an “unacceptable sentiment” coming from a government minister. Now that Italy doesn’t have a national unity government any more, he added, the question of arming Kiev is one of politics, and “such important choices do not escape from parliamentary confrontation. Otherwise we are the bullies: not of neighborhoods but of democracy.”

The public spat comes just days after the Italian newspaper Il Messaggero reported that Rome has de facto halted weapons shipments to Kiev, until the new government can sort out logistical and other problems, such as which weapons systems can be sent to Ukraine without rendering the Italian military combat ineffective.