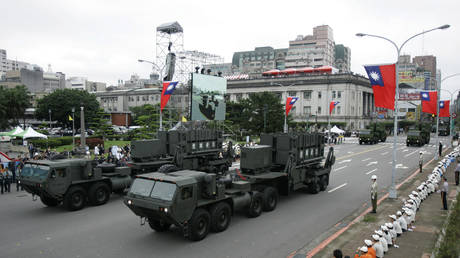 The US Senate proposal would give Taipei $4.5 billion in weapons and back membership in international bodies

A bill that would commit $4.5 billion in US weapons for the defense of Taiwan and promote Taipei’s membership in international organizations, among other things, cleared the Senate Foreign Relations Committee on Wednesday in a 17-5 vote. The Taiwan Policy Act comes after weeks of escalating tensions between Washington and Beijing that started with House Speaker Nancy Pelosi’s visit to Taiwan.

The bill aims to “reinforce US policy towards Taiwan in order to maintain stable cross-Strait deterrence,” Senator Bob Menendez, the New Jersey Democrat who chairs the committee, said, accusing China of a “campaign to undermine the status quo.”

“The most comprehensive revamp of US-Taiwan policy in more than four decades,” as Politico described it, would authorize $4.5 billion in “direct military assistance” to Taipei and “bolster Taiwan’s sovereignty” by encouraging its membership in international organizations. Menendez and its cosponsor, South Carolina’s Lindsey Graham, insisted this does not go against the official US policy of ‘One China.’

Menendez rejected the arguments that the bill would stoke tensions with Beijing, saying that it is instead “carefully and strategically lowering the existential threats facing Taiwan by raising the cost of taking the island by force so that it becomes too high a risk and unachievable.”

The bill gives Chinese President Xi Jinping “reasons to think twice about invading Taiwan,” Jim Risch of Idaho, the leading Republican on the committee, said. Oregon Democrat Jeff Merkley said that if the US doesn’t “crank up… support for Taiwan, there will be a military offensive” by China against the island.

Kentucky Republican Rand Paul voted against the bill, saying it was “not a time to radically change long-standing policy” without appreciation for potential consequences. Hawaii Democrat Brian Schatz also voted no, saying the talk of “symbols of sovereignty” may “irritate the Chinese” without the US getting anything out of it. Utah Republican Mitt Romney called the bill “highly provocative and bellicose,” but voted for it anyway.

According to Politico, it remains unclear whether Congress will pass the bill before the end of the year, or even if President Joe Biden would sign it.

Beijing is “firmly opposed” to the Taiwan Policy Act, Chinese Foreign Ministry spokeswoman Mao Ning told reporters earlier on Wednesday. Mao added that the One China policy is “the political foundation” of relations between Beijing and Washington, and “only by handling Taiwan-related issues prudently and properly can further damage be prevented to China-US relations.”