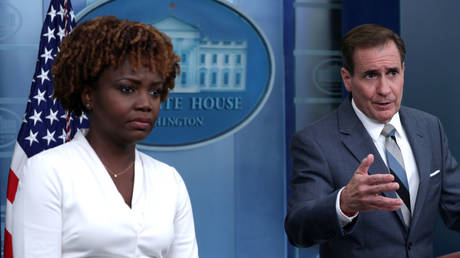 The White House has ratcheted up its political feud with Republicans over the US border crisis, suggesting that GOP governors who send illegal aliens to Democrat-run communities in faraway states resemble human traffickers.

“These vulnerable migrants were reportedly misled about where they were headed . . ., misled about what they would be provided when they arrived, promised shelter, refuge, benefits and more,” White House press secretary Karine Jean-Pierre told reporters on Friday. “These are the kinds of tactics we see from smugglers in places like Mexico and Guatemala.”

The statement came two days after Florida Governor Ron DeSantis sent two planeloads of migrants to Martha’s Vineyard, a Massachusetts island known as a playground of the rich and famous, where former President Barack Obama owns a beachfront mansion. Also this week, Texas Governor Greg Abbott sent two busloads of newly arrived migrants to Washington, where they were dropped off near the residence of Vice President Kamala Harris.

Republican governors have been transporting illegal aliens to areas that are staunchly pro-Democrat and pro-immigration for weeks. DeSantis and Abbott have argued that so-called sanctuary cities that prevent deportations of illegal aliens should share in the consequences of a fourfold surge in migrant traffic at the US-Mexico border since Biden took office last year.

The tactic has apparently struck a nerve with the White House. Biden responded to the latest transports of illegal aliens by calling DeSantis and Abbott “un-American” and accused Republicans of “playing politics with human beings.” Speaking at the Congressional Hispanic Caucus Institute Gala on Thursday night, he added that it’s “long overdue” for Republican lawmakers to help pass legislation that would enable illegal aliens to obtain US citizenship.

The migrants dropped off on Martha’s Vineyard didn’t have a long stay on the affluent island. Massachusetts Governor Charlie Baker, a Democrat, called out the National Guard on Wednesday to move the illegal immigrants to a military base. In Chicago, another target of the migrant transports, Democrat Mayor Lori Lightfoot reacted last week by sending dozens of the recent arrivals to a predominantly Republican suburb of the Windy City.

Biden: “We have a process in place to manage migrants at the border … Republican officials should not interfere with that process…” pic.twitter.com/FrcQuCDySz