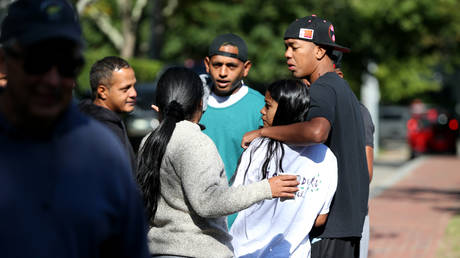 Dropping bus- and planeloads of newly-arrived illegal migrants into Democrat-run cities that do not enforce immigration law is “just disrespectful to humanity,” White House press secretary Karine Jean-Pierre declared on Thursday. She described the actions of Republican governors like Florida’s Ron DeSantis and Greg Abbott of Texas as a “cruel, premeditated political stunt.”

“They deserve better than being left on the streets of DC or being left in Martha’s Vineyard,” Jean-Pierre said, referring to the dozens of migrants being shipped north.

While she didn’t name any law that Republican governors were breaking by sending them from “red” border states to “sanctuary cities,” she stressed that there was “a legal way of doing this” and accused the governors of interfering in that process and “using migrants as political pawns.”

On Thursday, Abbott sent two buses full of newly-arrived migrants to the DC doorstep of Vice President Kamala Harris, who has visited the border exactly once since the Biden administration tasked her with handling the crisis there last year. Abbott has been sending buses full of illegals to Washington, DC and New York City for weeks, after declaring a state of emergency at the southern border in response to unprecedented numbers of migrants streaming across.

On Wednesday, DeSantis sent two planes loaded with migrants to the island enclave of Martha’s Vineyard, home of the Obamas and other political heavyweights. He has long called for federal funds to pay for the relocation of illegal immigrants he claimed the federal government had shipped to Florida without advance notice or the permission of state authorities.

The White House is working with the Federal Emergency Management Agency and local governments to “manage the consequences” of the relocation efforts, Jean-Pierre said. The government of Texas has also sought federal assistance in stopping the flow of new arrivals, only to be told the US-Mexico border is “secure.”