Why is Russia set to tolerate Türkiye’s attempt to launch a ‘small, victorious war’ in Syria? 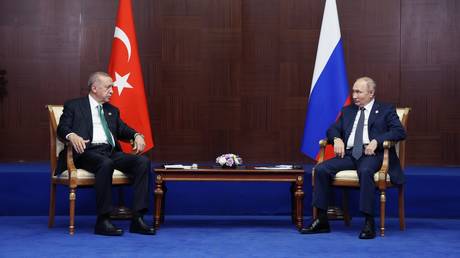 As Erdogan reportedly plans his own “special military operation,” Moscow has good reasons to value a stable partnership with Ankara

Earlier this week, Reuters quoted senior officials in Ankara as saying that the Turkish army had completed preparations for a ground incursion in Syria.

“It won’t take long for the operation to begin,” one of the agency’s sources was quoted as saying in the article. “It depends only on the president giving the word.”

Strictly speaking, news of Türkiye’s potential offensive is a bit delayed. President Recep Tayyip Erdogan announced plans for it back in May, when it was supposed to start any day, but never did. The main goal Ankara has declared is to fight against Kurdish self-defense units, which, according to the Turkish side, are a very serious security threat.

However, in six months of waiting for strikes against the Syrian Kurds, Türkiye has managed to conduct a ground operation against the Iraqi Kurds and even almost started a war with Greece and Cyprus (the probability of this is certainly low, but in 2022 such scenarios are not impossible.)

The Turks even managed to carry out an air operation against the Kurds in Syria – the reason for this was a terrorist attack in Istanbul, which Türkiye blamed on the Kurdistan Workers’ Party (KWP). After the tragedy, Turkish authorities looked a bit like a shipwreck in a storm: they indirectly blamed not only the KWP for what had happened. Damascus and – remarkably – Washington were also dragged in into the frame.

The allegation was that the mastermind of the attack, Syrian citizen Ahlam al-Bashir was, according to Turkish security forces, trained by American instructors in territory controlled by the so-called Syrian Democratic Forces (SDF).

In fact, that is why a joint base of the Western coalition and the SDF, where there was also US military personnel, was among the 89 targets of the strikes. Interestingly, the White House was not particularly outraged.

The forthcoming “ground operation” in northern Syria will be nothing new for Turkish troops – Ankara conducts them regularly, declaring the successful completion of its goals each time, but for some reason, it has failed to completely eliminate the “Kurdish threat.”

Nevertheless, there are many reasons for postponing such an event.

First and foremost, Erdogan wants to avoid clashing with Russian interests: Moscow is a reliable partner to President Bashar Assad, and its support has been pretty much the key factor that has allowed the Syrian leader to remain in power.

The Turkish president’s statements in this regard are very revealing: last Sunday he said that he did not rule out the restoration and normalization of relations with Damascus in the future.

There is no room for hard feelings in politics,” Erdogan explained.

Formally, of course, any operation would be a violation of Syrian sovereignty but, Assad’s forces have little control over the territories in question. At the same time, however, Russian officials have also warned their Turkish counterparts that such a move would hardly contribute to stability in the region.

These arguments are unlikely to calm the fervor of the Sultan – the fact is that the military campaign in this case is a prologue to his re-election campaign. Next year Türkiye will choose its next president, and there is no success to boast of in the domestic arena, where a prolonged economic crisis accompanied by record inflation creates fertile ground for the opposition. Erdogan is therefore forced to compensate for the lack of bread by looking to capitalize on pride in his country.

But even here he tries to be careful, only gently tugging at America’s beard. Take, for example, the epic tale of Sweden and Finland’s bid to join NATO.

Here it is important to note the context: Stockholm recently gained a new government, and Prime Minister Ulf Kristersson commenting in parliament on the bombing of Kurdish formations in Syria, stated that “Türkiye has the right to self-defense.” He also touched upon another important issue, which Ankara considers crucial for accepting new members into the US-led military bloc: Kristersson stressed that Sweden should not be a safe haven for terrorist organizations. Apparently, he was referring to KWP supporters, whose extradition is demanded by Ankara. His predecessor, Magdalena Andersson, was far less accommodating on this issue.

Of course, time is on Erdogan’s side here, which explains the message to Scandinavian politicians from his Foreign Minister Mevlut Cavusoglu, who said that Sweden and Finland still have hurdles to jump before joining NATO.

The Turkish president is very good at bargaining, and even when conducting actions that run counter to the interests of his partners – both the US and Russia – he skillfully uses attractive concessions to smooth things over.

The main thing in this situation is to understand that Moscow and Ankara are not allies, but partners and neighbors with many overlapping interests that need to be considered. Something which is part of the multipolar world that both countries hope to help build.

And of course, an independent, and at least relatively stable Türkiye is a far better option for Russia than one obedient to Washington.